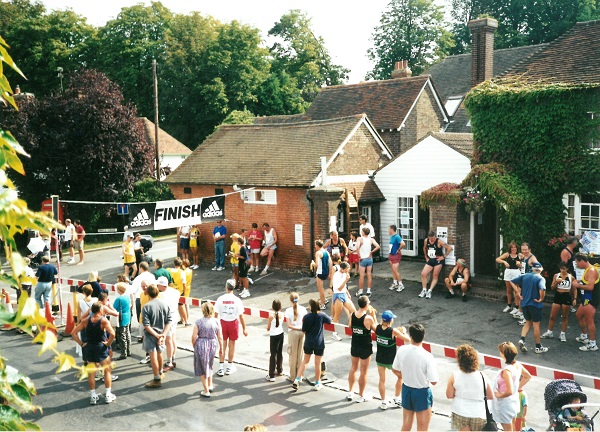 The top three finishers at the Kings Head Canter 5K on Bank Holiday Monday (27 August) shared the same regal forename. James the first was James Westlake, of Crawley AC, as 206 finished the 21st edition of this enduring road race.

Kings Head Canter has been held on the same undulating route from Chiddingly Village Hall to the Kings Head pub and micro brewery at East Hoathly every year since 1998 (see photo of the inaugural finish above).

Little has changed and the race still finishes outside the popular Sussex village hostelry, a former school house that was converted into the central village pub in 1648. The micro brewery is situated next door in the Old Stables and village forge and all finishers in this 'point to pint' run receive a free glass of well executed ale from the 1648 Brewing Company.

James Westlake was clearly thirsty as he covered the slightly under distance (4,980m) course in 15:16, just 10 seconds outside Finn McNally's course record of 15:06 set last year. The other James's to climb the rostrum were M45 James Skinner (Haywards Heath Harriers, 15:54) and James Turner (Brighton and Hove, 16:10).

The post race BBQ was enjoyed as prizes were distributed on the green, including Jog Shop Brighton vouchers and unique trophies depicting the historic venue. Proceeds from the race, which is organised by East Hoathly and Halland Carnival Society, go towards the spectacular annual carnival in November each year.