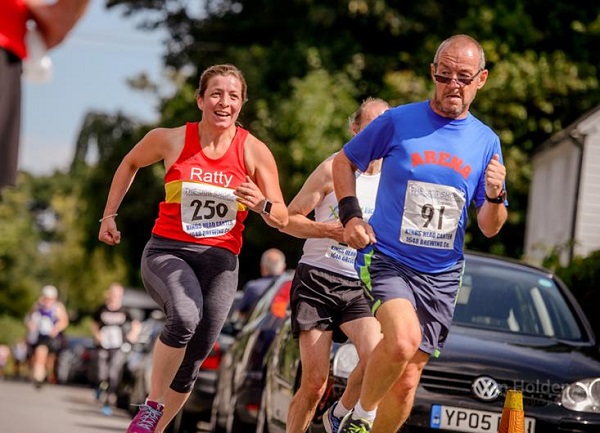 One of our favourite smaller races takes place this August Bank Holiday Monday (26 August). The Kings Head Canter 5K gallops into its 22nd year, with the same winning formula and old school values that brings runners back to the Sussex villages of Chiddingly and East Hoathly.

Those values include entry fees from £10 that include a free pint of craft ale from the 1648 Brewing Company based at the Kings Head public house – established in 1648 – that hosts the finish for this 'point to pint' classic. Naturally, soft drink alternatives are also available!

The 1648 Brewing Company micro brewery is situated next door in the Old Stables and former village forge and the crowded green in front of the hostelry hosts a popular BBQ and the prize giving ceremony.

Part of the charm of this race is its course through gently undulating Sussex countryside, with a fast downhill finish. Runners either park at Chiddingly and jog back on footpaths to collect their cars to warm down or perform the reverse process and warm up to the start. The route is clearly marked on the Wealdway footpath and is an attractive part of race logistics on a nice day – which is not always the case!

The forecast is sunny intervals and a gentle breeze with 22C predicted for the 11:00am start. Proceeds from the race, organised by East Hoathly and Halland Carnival Society, go towards the annual carnival .

Let's hope we have another fine day as illustrated in our picture courtesy Jimmy the Snaps of Mark Dewdney (Arena 80) and Tara Twyman (Lewes/Team CfS) enjoying a full blooded sprint for 23:40 to finish just outside the top 100 in the 2016 race.