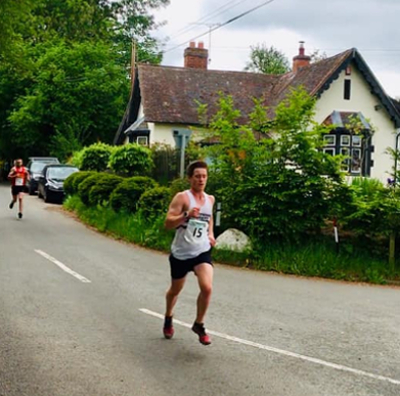 A sharp piece of running by Jon Barnes saw him win Sunday’s (26 May) Crocodile 8 where he set a new course record at this demanding multi-terrain race.

The Crocodile 8 was held at Burghill, Hereford and on a mixture of woodland trails and tarred paths, passing through an orchard. It had a bite to it in the form of Badnage Woods or ‘the crocodile’ that includes a set of steps that runners climb up before leaving the woods and out onto Tillington Common.

There was a Mini Fun Run for pre-school and reception children, years 1 to 6 at 1pm followed by the adults’ race at 3pm. The Junior race started at the same time as the seniors - from the back of the field - to complete 2.5 miles. Over 300 runners set off from Burghill Community Academy with 8.8 miles of stunning trails including ‘the crocodile’ waiting for them.

Jon Barnes of Cheltenham & County Harriers looked in control as he raced to victory in 55:05 and a new course record. There was a gap of over two minutes between him and Matt James of Hereford Couriers who finished second in 57:30. Daniel Ayers of Aldershot, Farnham & District AC was third in 58:51.

Marathon queen Gemma Mallett of Croft Ambrey RC showed her strength over shorter distances to become the winning female in 1:07:36. Niki Morgan of Mynydd Du came second in 1:08:20 with Claire Thomas of Ludlow Runners not far behind her to finish third in 1:08:39.

The Bell pub, Tillington hosted the prize giving and the popular Post-Race Party with profits going to three local charities.