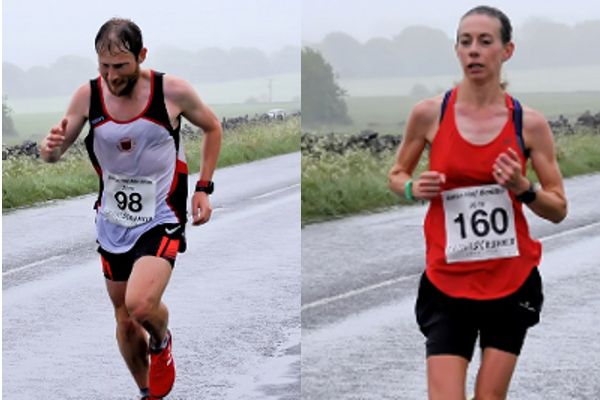 When the going was tough Gareth Cooke and Hayley Gill got going with victories at a very wet Buxton Half Marathon (Sunday 26 May) where wind and rain proved a challenge to the marshals as well as the runners.

Rain, rain and even more rain along with high winds were the order of the day at the 38th Buxton Half Marathon, a tough yet popular race in the superb Peak District. A well organised event from Buxton AC the event attracts a good field of runners from near and far who test their fitness levels (and legs!) on a hilly course around this Derbyshire spa town.

At 10am over 400 runners streamed away from the Opera House and straight into the first of the climbs out of Buxton. Weather conditions were a contrast to the sunshine and warmth at the 2018 race – this year it was murky with constant headwinds making it hard work from start to finish. One casualty was the Mountain Rescue massage tent which blew over!

Gareth Cooke of Penistone Footpath Runners & AC defied the elements to finish in 1:17:09 and claim first place. There was a PB of over three minutes for the running man in blue. Alex Tate of Muddy Mucky Munkeys AC was second in 1:17:31 with Phil Skelton of Steel City Striders third in 1:20:37.

A group of marshals at West Road were especially grateful to a lady from Peveril House who provided them with tea and coffee – a thoughtful gesture that was appreciated by the soaked volunteers.

Fingers crossed for a dry 2020 Buxton Half Marathon...