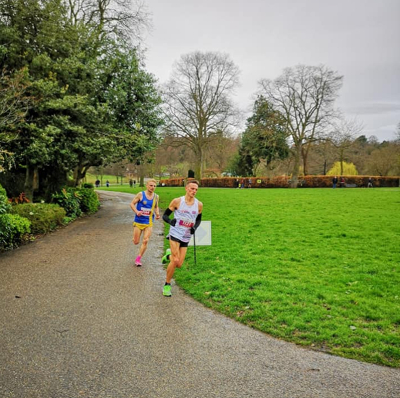 The narrowest of margins separated Jamie Lambie from Patrick Townsend at the finish as they battled all the way at The Mercedes-Benz Shrewsbury 10K yesterday (Sunday 15 March). They were amongst 2,000 runners who went to town at this well-supported race.

In the light of the coronavirus outbreak, the organisers consulted local and national bodies and following their advice, decided to go ahead with the race. They took people’s concerns into account and offered a virtual run for anyone who felt unable to participate for those reasons.

There was a change to the route this year that took runners through the grounds of Shrewsbury School where a spectators viewing hub had been set up at halfway. Also new this year was the launch of the Shrewsability Run - as part of the race’s inclusivity ethos. The organisers worked closely with charity partner Shrewsbury Town in the Community to host a 620m run that started at 8.45am.

This was followed by the feature 10K at 9am where Jamie Lambie and Patrick Townsend wees soon at the front. The pair stayed together in a hard fought contest that culminated in a sprint to the finish where Jamie Lambie of Shrewsbury AC raced to a win in 31:24. Only one second between him and Patrick Townsend of Notts AC who finished in 31:25. Thomas Vaughan of Shropshire Shufflers was third in 33:11.

Olivia Papaioannou of Belgrave Harriers won the women’s race in 37:46. Amanda Wright-Smith of Birchfield Harriers was second in 39:38 and Abi Turner of Lonely Goat RC third in 40:37.

The finisher’s medal was a work of art: designed by Shrewsbury School student Will Cowper – it combined three aspects of the race. These were the school, its famous pupil Charles Darwin and The Mercedes-Benz of Shrewsbury logo.