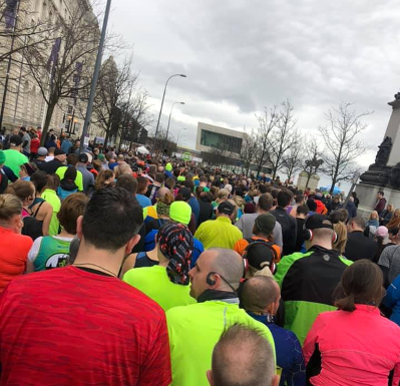 Keen & green at Liverpool Skyline Half

Free race day travel and medals wrapped in biodegradable paper were part of the sustainability ethos at the Liverpool Skyline Half Marathon yesterday (Sunday 15 March). The event also showed its altruistic side with donations to Fans Supporting Foodbanks.

Organisers BTR Liverpool posted regular pre-race updates about the coronavirus outbreak where they confirmed that the event would go ahead following advice from respected medical sources. They asked participants to be extra aware and follow hygiene guidance issued by the NHS and other relevant bodies and offered a virtual half marathon or 10 mile option for those who were unable to attend.

As part of their environmentally-friendly credentials there was free bus travel for runners on the day from Arriva North West in a move to reduce their carbon footprint. It also helped to alleviate the stress of travelling to and from the race and/or parking.

Around 2,500 runners took part in yesterday's staging of the half marathon and 10 miler with both started and finished on the UNESCO World Heritage site at the Pier Head. The Pier Head was also the location for Fans Supporting Foodbanks whose van was the collection point for donations from runners and spectators.

Alistair Rutherford of Liverpool Harriers & AC won the Half Marathon in 1:09:50. Charlotte Mason of City of York AC was the female winner in 1:21:43.

In the 10 Miler, Alexander Soderberg of Sparvagen FK was the winner in 54:52. Joanne Harrison of Penny Lane Striders won the women’s race in 1:10:35.

The goody bag contained a range of items that were healthy and practical including recovery food and drink and a free sample of Ariel pods. Finishers’ medals were wrapped in sustainable tissue paper.