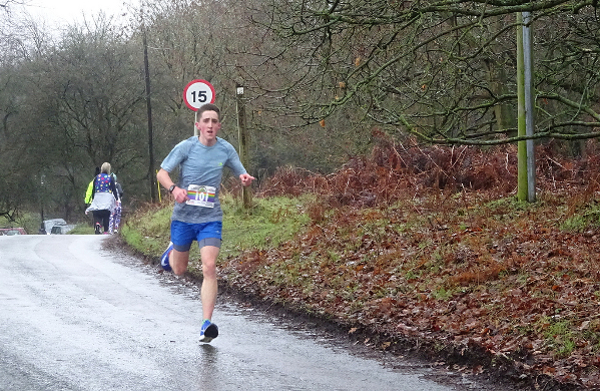 A new, hillier route at Sunday’s (10 February) Walton Wobble 10K didn’t stop Jack Pickett in his tracks. He remained calm and in control to take first place at this quad-busting event.

Safety concerns meant that organisers JC Race Solutions had to create a revised course for 2019 and the new route provided a stiff test for over 250 runners. Last year’s race included a long stretch on busy roads but this was removed and replaced with an out and back route on country lanes and featured a section in Cannock Chase.

There were climbs up Brocton and Walton hills that caused quite a few legs to tremble although the thought of a post-race pancake kept the runners going until the end.

Jack Pickett of Wolverhampton & Bilston AC won the men's race in 34:07, adding this to recent victories at the Sheepwalks Shocker and the Ellesmere 10K. Last year’s winner Craig Pilsbury came second in 35:15 with Pickett’s teammate Robert Cartwright third in 37:13.

The climbs didn’t pose any problems for women’s winner Kelly Butler who crossed the line in 41:49. Laura Sandy was second in 45:53 and Charlotte Beddow of GB Ultras third in 46:24.

There was a commemorative medal for every finisher, water, bananas and a dog biscuit (Bonio). Whilst the bonio was appreciated by man’s best friend, the pancakes served by The Crepe Revolution more than satisfied the tired, hungry runners. They will return in February 2020.

A sizeable percentage of the entry fees was donated to official charity partner Race Against Blood Cancer.

JC Race Solutions will be holding a Summer Walton Wobble in July. Visit the website for more details.