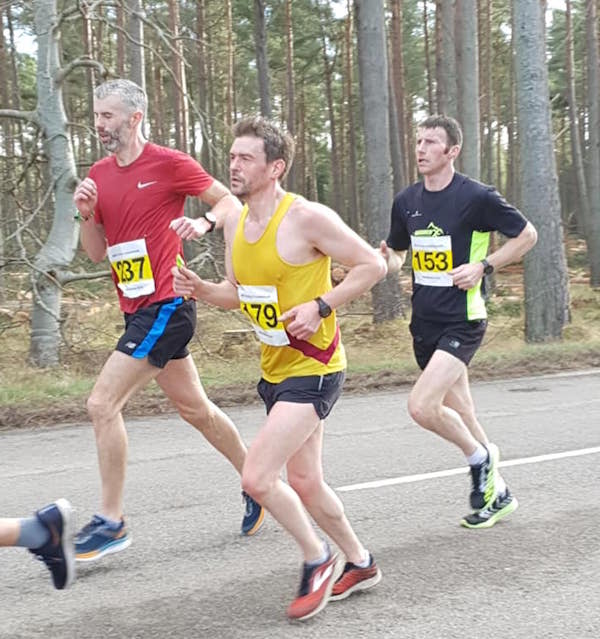 Roche & Hudson fly from Kinloss to Lossie at Moray RR Half

280 runners completed the MRR Kinloss to Lossie Half Marathon yesterday – in springlike conditions that were a welcome change from the morale-sapping ice and cold of recent weeks.

Organised by the Moray Road Runners, the event is popular in its own right as the North District’s first distance event of the year, but it is also used by many of the region’s runners as a pacing or training run for spring marathons like London, Barcelona and Paris.

The event used to be run from the gates of RAF Kinloss to gates of RAF Lossiemouth, but in need of a little bit more distance, the start was moved in recent years.

runABC Scotland’s Christine headed up to Lossie as part of her own preparations for Boston, earning herself a place as second female vet in the process. “This was my first time running the Kinloss to Lossie Half, and I really enjoyed it. The Moray Road Runners fully deserve their reputation as top-notch hosts and race organisers.

“The point to point route threw up a few surprises on what you would think would be flat terrain, and I don’t think anyone could agree on where the wind was coming from … except from mile 12 when it was blowing full force into you! But the vibe after the event was positive and convivial, as it always is when MRR are in charge.”

As with all Moray Road Runners events, the Kinloss to Lossie Half was a team effort. With a day off from training, Scotland International and Moray Road Runner Kenny Wilson was on bag drop duty.

Since runABC Scotland last spoke to him in December, Wilson said his training hasn’t gone quite to plan (‘Must've been the cupcake I ate after our Turkey Trot!’, he joked) but he’s looking forward to the Lindsays National XC next week and then the Vitality Big Half in London.

runABC Scotland online also caught up with race winner Tom Roche (JSK Running Club) in the queue for post-race cakes. Roche, who came second last year to Robbie Simpson, said: “I had a great first 12 miles then it all sort of fell apart! Still, at 1.12.33, I took nearly a minute and a half off my time from last year.”

Roche has a busy few weeks ahead of him with Inverness and Run Garioch halfs, which he will be using as speed and pace training for London Marathon. “I find it’s easier getting up to pace in a race, rather than out there on my own.”

The women’s race was won by Inverness Harrier Amy Hudson (1.24.27), who was just over 30 seconds ahead of Roche’s teammate, Boston-bound Marie Baxter. Third female was Fraserburgh’s Lisa Allan.