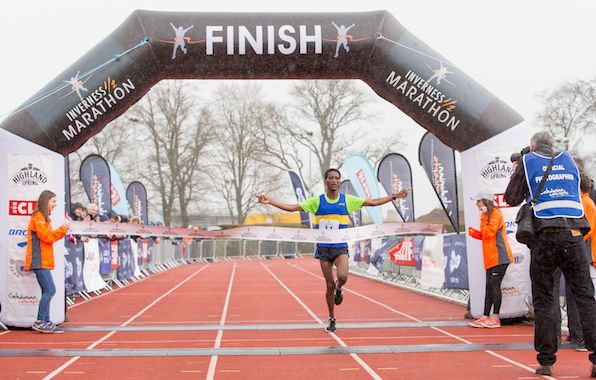 Glasgow athlete Weynay Ghebresilasie has his sights firmly set on earning a handy bonus by breaking the men’s course record in this year's Inverness Half Marathon, entries for which close on Tuesday, 18 February or earlier if the race capacity is reached.

Given that the race has sold out before the deadline the last two years, an early close to entries is more than likely.

This year, organisers are offering a £100 windfall on top of the winner's prize of £300 for whoever can crack the time of 1.04.27 set by Deeside's Commonwealth Games marathon bronze medallist Robbie Simpson in 2018.

Ghebresilasie, who represented his native Eritrea at the 2012 Olympics but hopes to compete for Great Britain at this year’s Games in Tokyo, clocked 1.06.48 when winning the Inverness title three years ago. Now the Shettleston Harrier is poised to go much faster in the Highland capital on Sunday, 8 March.

As his coach, John Mackay, explained, "Weynay is currently training at altitude in Ethiopia but will return for the Big Half Marathon in London, ahead of Inverness Half Marathon. He hopes to run a very fast time before April's London Marathon. He has done 1.04.06 [at Manchester last year] but we are looking for sub 63 mins or faster.”

The same £100 bonus incentive is being offered in the women's division of the race, the target being the impressive 1.13.21 by Kenya's Cathy Mutwa in 2013.

Liz Abbott (Lytham St Anne's Road Runners), who won last year in a personal best 1.16.48, is returning to have a crack at defending her title.

Race director Malcolm Sutherland said, "The race has attracted many top calibre athletes throughout its 35-year history and the 2020 event is maintaining that tradition. We are delighted that Weynay and Liz are among the top names returning to our event.

‘We thought, however, that we could add a bit more spice to the occasion by offering bonus prizes for record-breaking performances. The existing men's and women's records are outstanding and it would be amazing if they could be rewritten. It will be intriguing to see the elite runners trying to achieve that."

He added, "It's always exciting to see international class athletes competing on the streets of Inverness but we are equally inspired by all the runners who take part."

Entries to both Inverness Half Marathon and the 5K are available now. Discounted entry fees for the 5km event are available for schools, youth clubs and disability groups entering a team.