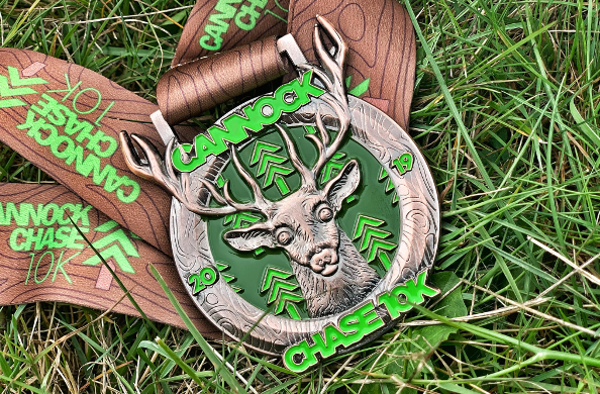 Over 700 runners got to decide whether hills were their friend or not at Sunday’s (4 August) Cannock Chase 10K. Their prize was a superb forest themed medal.

It was the sixth outing for this tough but enjoyable race held at Cannock Chase, an Area of Outstanding Natural Beauty (AONB) in Staffordshire. Popular with mountain bikers and walkers as well as runners it contains a mixture of woodland, open heathland, trails and trees. And hills of which there are plenty.

Everyone assembled outside Birches Valley Forest Centre, waiting to start at 10.30am. They headed off along a dry route on tracks and trails that began with a downhill section then into the heart of the forest and the first of the inclines. This was followed by more ups and downs – all with stunning views.

Marshals and spectators cheered the runners on: their support was appreciated particularly at 7K where a particularly steep hill awaited them. They reached the final 200 metres then around a corner before a sprint – if their legs would allow it - to the finish.

Tuesday rep sessions by endurance coach John Danahay paid off for William Laye of Bridgnorth RC who won the Cannock Chase 10K in 36:36. Barry Lloyd of Royal Sutton Coldfield AC was second in 37:58 with Ben Witham third in 38:54.

Every finisher received a fine-looking medal and goody bag with many planning to return next year to tackle the ‘mounds of opportunity’ yet again.