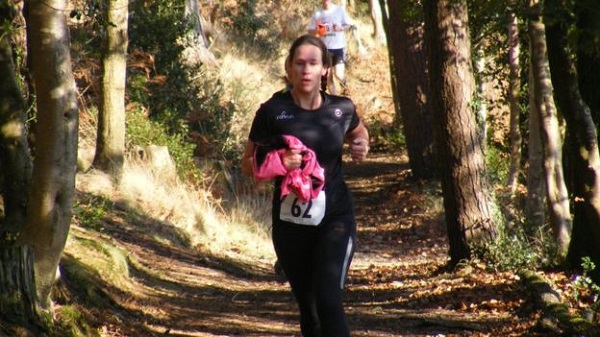 The Forestry England website entry for the Haldon Forest Park 10K promises the 'chance to catch a glimpse of local wildlife' but one competitor got rather more than a fleeting glimpse when she was flattened by a startled deer at the race on Sunday (23 June).

Karen Brewer (W50 - pictured above) was knocked off her feet by the deer which sprang out of bushes while she was taking part in the trail race through the popular forest park near Exeter. Karen might have been expecting to view the rare goshawk, hobby, sparrowhawk, buzzard or kestrel that breed in Haldon Forest but instead she found a surprised deer in her lap!

Karen suffered bruises to her ribs and right calf in the collision but quickly got back to her feet and finished the race in 1:04:44 to win her age category by nine seconds. After the incident she explained what had happened: "I heard a rustle and seconds later I was thrown into the bushes and a deer landed right on top of me," she said. "It was quite a shock, I thought deer were more shy than that. After I found out I was OK, I got up straight away, I didn't want to waste any precious seconds. I actually found it quite hilarious."

The race is part of a series of 10K events to celebrate 100 years of Forestry Commission England with race management by Sussex-based Nice Work. There were 178 finishers in 1:38:58 on the tough course at Bullers Hill, Kennford.

Meanwhile, Karen Brewer was last seen heading home to Cullompton to ice her bruised ribs and calf and perhaps consider joining a running club. runABC South lists plenty of choices in Devon but maybe Lonely Goat Running Club might be worthy of consideration given her apparent affinity with solitary even-toed ungulates?