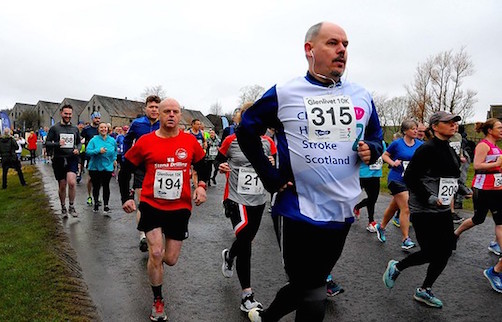 Celebrating 10 years of the Glenlivet 10K

The 10th anniversary Glenlivet 10K in aid of Chest Heart & Stroke Scotland took place last Sunday (7 April), with runners representing every part of Scotland, including the isles of Barra and Skye. There were also runners from the Borders, England and one from Wales too. A special welcome was afforded to the three runners who came from Sweden, Germany and the USA respectively.

Although entries for the race were down on last year’s record numbers, there was once again a fantastic atmosphere at the event hub at the Glenlivet Distillery, as runners gathered to celebrate the 10th birthday of ‘the most beautiful run in Scotland’.

The weather conditions were ideal for running – cool, damp, still and bright – with late snow on the hilltops and daffodils and newborn lambs to add to the stunning landscape panorama.

Following an excellent warm-up session led by the Aberdeenshire-based ‘Military Fitness’ team, runners took on the challenging course with gusto and even managed to keep a sense of humour when running up the infamous ‘steady incline’: the protracted hill climb from Drumin Smiddy to Gallow Hill.

At the top of the hill the tired runners were met by a great view of the Ladder Hills and a great cheer from the local ‘Gallow Hill Team’ water station before the welcome downhill section to Tomnavoulin junction. From here, all that was left was a fast-paced 4 km along to the finish, with another water station provided by the ‘Glenlivet Hill Trek Team’ enroute.

The four runners who have now completed all 10 editions of the race ­– Angela Mitchell (Huntly), Grace Kinsella (Burntisland), Lee Philip (Aberlour) and Robert Bruce (Lossiemouth) – all received special prizes donated by the distillery.

Event organiser Paul Corrigan, Chest Heart & Stroke Scotland North Fundraising Manager, who ran the race this year as ‘number 10’, told runABC Scotland online: “It’s hard to believe that this was the 10th anniversary of the event. Without the assistance of the local community, the Glenlivet Distillery and the many volunteers, helpers and sponsors who all generously support the event, it would simply not be possible to have the continued success of the Glenlivet 10K for so many years.

“Directly because of this valued support, the Glenlivet 10K event has raised nearly £200,000 in total for the vital work of Chest Heart & Stroke Scotland since the first race was held back in 2010. These funds go directly to ensure that people across Scotland who have survived a life-changing illness can get the support they need to recover their lives and lead the life that matters to them.”

The date for next year’s Glenlivet 10k, the 11th edition of the race, has been set as 5 April.

To register your interest in the 2020 event, and for photos and results of the 2019 event, see the race website.