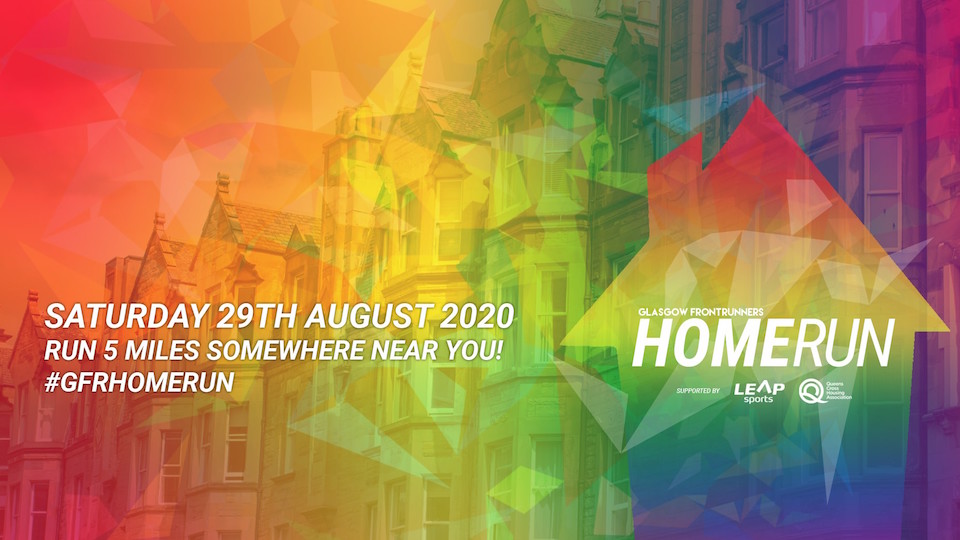 Glasgow FrontRunners aim to hit a HOMErun later this summer

With their sixth OUTrun in Kelvingrove Park off the cards this August, Glasgow FrontRunners have gone virtual for 2020's big event

Glasgow FrontRunners, the award-winning and inclusive club have launched ‘HOMErun’ – a five-mile run from anywhere a runner wants to start – will be held on Saturday, 29 August.

Like most virtual events, the rules of 'HOMErun' are straightforward. Runners must stick to whatever government advice is in force when heading out for their run, time it and share their screenshot on social media (tagging @GlasgowFrontRunners).

But they should also keep an eye out on social media for information about ‘some exciting surprises’ the club has in store for them on the race day.

Entry to the event costs £10, with the option of making an additional donation at registration to help make up for funds traditionally raised for the club's charity partner at the race-day bake sale. All proceeds from the event will go to The Terrence Higgins Trust (Scotland).

'HOMErun' is supported by two of Glasgow FrontRunners’ annual sponsors: LEAP Sports Scotland & Queen's Cross Housing Association. Their support allows the club to continue to engage and promote health and wellbeing through running among LGBTQI+ adults, regardless of race, religion, sex, sexual orientation or physical ability.

The club's hard work in that regard has been recognised this year in the form of a nomination for a 2020 Scotland Proud award. Their nominated category – ‘Sports Person/Sports Group’ of the year – recognises excellence in any sport, or outstanding leadership in the encouragement of sport inclusion for the LGBTQ+ community.

Glasgow FrontRunners will find out in October if they’ve won the honour.