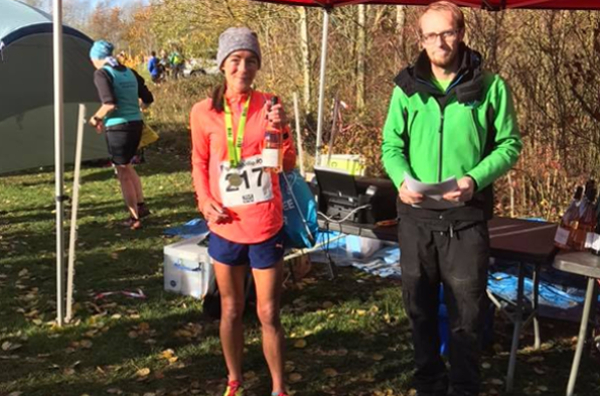 Professional athlete Gemma Steel was amongst the spectators who applauded runners at the 7th Coalville 10K, one of several events organised by Nice Work. This well established race was held on trails, footpaths and roads around Snibston Country Park and proved to be a tough, muddy challenge.

There was a children’s race at 10.15am followed by a two minute silence then the main event at 10.30am. The decision was taken to start the race before 11am to prevent any disruption to the Remembrance Day parade and avoid traffic congestion. The runners set off in wet conditions with a hill at the first mile giving everyone a taste of what to expect on this two lap course.

Amongst the leading pack was Gaynor Watts, a Team GB European and World Middle & Long Distance Duathlete and ultra runner from Coalville, Leicestershire. Her hill training was a deciding factor in her victory along with a strong display of running to be first female in 47:19 and 23rd overall out of 177. She finished two minutes ahead of Lisa Wright of South Derbyshire RR who was second in 49:19. Alison Haines was third in 51:16.

Gaynor was delighted with her win as it came after three intensive weeks of training which paid off on the day. Chrissie Wellington and her father are her sources of inspiration as she continues to progress, saying: “There is always room for improvement whatever level you are at”.