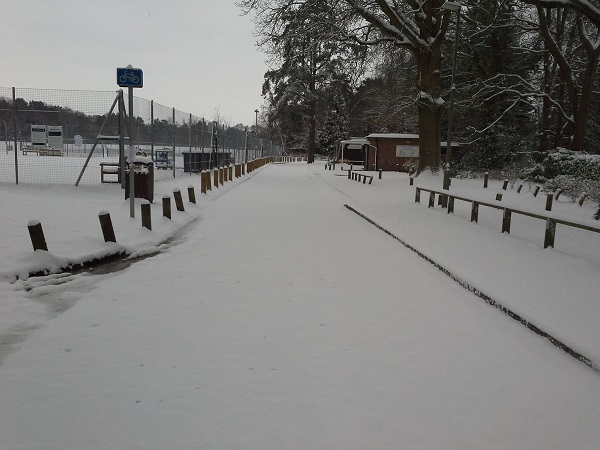 Better Late Than Never For Fleet

Our picture graphically illustrates why the 37th ASICS Fleet Pre-London Half was held on Sunday (29 April) a week after the annual pilgrimage to the capital for Virgin Money London Marathon. The 'Beast from the East' got its claws into the South East on 18 March and this was the scene at the finish line on the original date for this classic marathon preparation race.

Race organisers, Fleet and Crookham AC, reluctantly postponed the event, then crammed nine months work into six weeks to ensure the event could be held and were rewarded with many expressions of gratitude such as this on Facebook: “Fantastic race! I've done many HMs and this was one of the best organised I've ever done. Surprisingly beautiful course and a really lovely medal. Thank you to the race organisers and the wonderful volunteers. I was suffering too hard to thank them all as I ran past but I appreciated their kindness so much."

The Fleet Half Marathon usually attracts 3,500 runners but the drift to the wrong side of the VMLM reduced the entry to 2,000. Part of the reorganisation involved a number substitution scheme as athletes' plans changed – just one of the many efforts made by the organisers to accommodate as many people as possible.

The leading positions reflected the incorporated Inter-Services Championships and Robert Wood, representing RAF, flew round the rural course in a PB by four minutes (1:09:36) to take the race victory from Elly Tarus (Army, 1:13:04) and Toby Lambert (Winchester, 1:13:16).

The scrap for podium places in the women's race was keen as Helen Cozens (1:21:53) delighted her Fleet and Crookham team mates on her 13.1 mile debut to win from Eleanor Harrison (Guildford and Godalming, 1:23:06 PB) and ultra runner Valeria Sesto (W45 New Forest Runners, 1:24:08).

Just under 180 runners beat 90 minutes and the final two finishers were the only runners outside three hours as the timekeepers closed up shop on 3:11:31.

New for 2018, the Junior Mile Fun Run saw 64 youngsters cheered across the official half marathon finish line. Fleetest in Fleet were Olly Webb (5:52) and Christina Kirby (6:05).