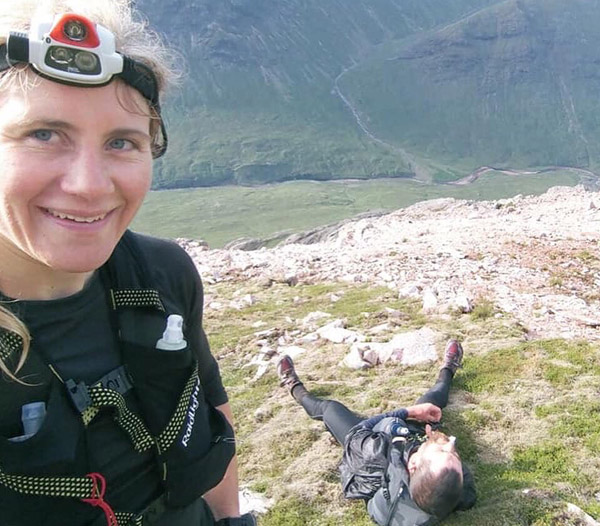 The Etive Round in the nick of time

With long evenings and recent good weather, speed records for UK mountain-rounds have been tumbling this summer (writes Girls on Hills' Keri Wallace). Already this summer, local fell runner Es Tresidder broke the notoriously difficult Charlie Ramsay Round, completing the 58 miles and 24 summits in 16 hours and 12 minutes (breaking the previous record which belonged to Jasmin Paris by just one minute).

While most fell runners have heard of the Bob Graham, Paddy Buckley and Charlie Ramsay rounds (and more recently the Wainwrights Round, thanks to the incredible Paul Tierney), there are in fact many other ‘recognised’ mountain rounds that receive far less attention. On the same weekend as the new Ramsay Round record was set, another record was broken just a few miles away in Glen Etive.

The ‘Etive Round’ (also known as ‘Digby’s Round) circumnavigates the Etive valley in a clockwise direction taking in 16 Munros over 46 miles, with 25,000 feet of ascent. This round was originally devised by Digby Harris in 2017 and his record was broken on 7-8 July by local athlete Jon Gay (Lochaber Athletic Club) and Majka Kunicka (Dark Peak Fell Runners) in a time of 22 hours and 15 minutes.

“The idea of doing a round in Glencoe/Etive area was always in my mind. I have a deep-rooted love for the Scottish hills and I've been particularly affected by the Glen Etive Munros’ beauty for some time” says Kunicka.

The elegant round has two distinct halves, separated by the Etive road. The first, rougher section starts with Beinn Fhionnlaidh and Sgor na h- Ullaidh then scrambles up the back of the Bidean massif. From here it takes in the Munros facing north/west into Glencoe, before descending into Glen Etive. The round continues up Creise, finally turning into a smoother, more ‘runnable’ half, finishing with Ben Starav, before heading down to Coileitir. For full route details see www.gofar.org.uk/etivemunrosround.html

The pair, who regularly train and race together have spent months studying, planning and recceing the route ahead of the attempt last weekend.

“Although we were going well and the conditions were perfect, the last three Munros were really hard” says Kunicka. “Beinn na Aighenan was my lowest point. I definitely could not run anymore. Even walking was hard enough, but I remembered my boy's words: ‘I don't want to see you mum unless you finish it!’ And so we did! We sprinted to the gate and laughed ‘let's turn back and go for the double!’”

The appeal of less well-known mountain rounds such as the Etive Munros Round perhaps lies in the comparative quietness of the hills and the trackless, less frequented terrain. It is also worth considering the significant environmental impact of the increasing number of walkers and runners that frequent the hills of the most popular mountain rounds in the UK.

Gay and Kunicka hope that their success will encourage more runners to attempt the round in future and that this in turn will add further support to the campaign seeking to protect Glen Etive. For more information visit the 'Save Glen Etive' website.