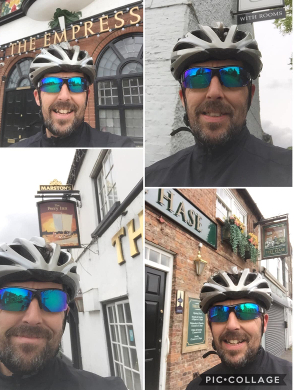 Doing the rounds on the Alphabet Run

Creativity was out in force as runners were as expressive on camera as they were on the roads and trails in the week-long Alphabet Run. One runner got into the ‘spirit’ of things by finding all but one of the 26 letters as he cycled around pubs in Hull and East Yorkshire.

Runner and cyclist Rich Rex went pub hunting for his letters although he was unable to top up his fluid levels in these establishments, closed due to the coronavirus outbreak. He, like many others undertaking this challenge including this correspondent, declared it to be 'good fun'; it has helped keep him going in this crisis.

The concept originated during a discussion on the See York Run York Chat Group on Facebook when one runner mentioned about her club organising a treasure hunt. Another person suggested finding things beginning with a specific letter of the alphabet and the idea became a reality.

Monday 27 April was the start of the 7-day challenge in which 26 letters of the alphabet were divided into groups of three or four each day. So letters A, B C and D on Monday, E, F, G, H on Tuesday and so on. Some letters proved trickier to find than others but runners are a resourceful bunch as could be seen in the gallery of images posted on the See York Run York Chat page every day.

Themes started to emerge; there was humour, witticisms and some very clever word play. Whatever participants uploaded was met with friendly, supportive posts and there was good camaraderie as we viewed each other’s photos and accompanying descriptions.

Sunday and the final day of the Alphabet Run: the last images appeared including a couple of excellent collages showing all 26 letters.

An ‘A’ for organisation, effort and enthusiasm shown by everyone involved in this community-minded challenge.