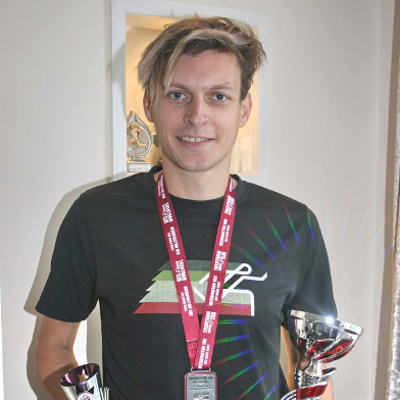 Daniel Soltys celebrated his return from injury with victory at Sunday’s (13 October) Sub-4 Werrington 10K. He also took the top spot in the Trentham Triple.

A member of Stone MM, Daniel had enjoyed a successful season up until August when disaster struck at Leek Half Marathon. His running shoe fell apart at the sole resulting in a calf strain and minor tear that sidelined him for two months. Thanks to help and advice from coach John Danahay of High Performance Runner, he was back running with the Werrington 10K his first race since the injury.

The penultimate race in the NSRRA programme; the Werrington 10K was organised by Trentham RC and sponsored by Sub-4 whose managing director Clifton Bradeley ran it in 29:50 when it was a 6 mile course. He posted a course record in 1989. The 6-miler ended in the nineties but was brought back as a 10K in 2013 thanks to Trentham RC.


Part of the Trentham Triple series, the other two evetns are the Trentham 10K and Dave Clark 5K, it was an undulating 6.2 miler on country roads around the Staffordshire Moorlands. Daniel’s plan was to complete the race and pick up the points required to finish runner-up in the NSRRA championship.

He found himself within the leading group and stayed with the pace, being careful not to put his calf muscle under too much strain. However, his competitive instinct took over and with half a mile to go, accelerated away from the others to win the race in 35:09.

Daniel was also first overall in the Trentham Triple and has secured second place in NSRRA for this year. His next target is sub-58 at the Flying Fox 10 on Sunday 3 November.