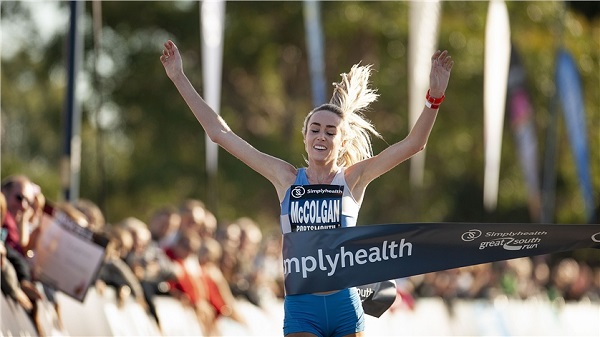 Britain's most decorated winter Olympian, Lizzy Yarnold, honorary starter of Simplyhealth Great South Run last year, was so inspired by the race day atmosphere that she will line up alongside a capacity 20,500 field for the 30th anniversary race on Sunday (20 October).

Considered by many to be the world's favourite 10-mile road race, last year's winner was Chris Thompson (Aldershot, 46:56) in what he described as a 'threepeat victory' after his successes in 2016 and 2017. There was a 10-mile debut win for Dundee Hawkhill's Eilish McColgan (54:43) following in the footsteps of her mother, Liz, champion in 1995 and 1997.

After all 20,000 places sold out in record time, organisers released an extra 500 places which went in 48 hours! A 60-second clip of the best bits from last year is on YouTube here and if you have three minutes to spare, here is the coverage of the 2018 elite races to view. Of course, it's not all about elite athletes and you can see below what finishing 14,399th in 2:09:23 meant to Emily Belcher and Charlie Essex in last year's Great South Run.

Stunning sea views are promised as athletes run the final miles on Clarence Esplanade and past Southsea Model Village, Southsea Pier and the Rock Gardens – popular vantage points where runners can be supported twice en-route.

After last year's race Jayne Fearn, Simplyhealth spokesperson, said: “The glorious sunshine made for great conditions for a fantastic weekend of events in Portsmouth, from the first ever Simplyhealth Canine Run to the Simplyhealth Great South Run on Sunday. Supporting runners every step of the way, thousands enjoyed our post-run stretch zone and free massage. We're already looking forward to next year.”

runABC South will carry race reports and a link to the results as usual. All that remains is to hope for kind weather conditions and an exciting weekend for everyone involved.