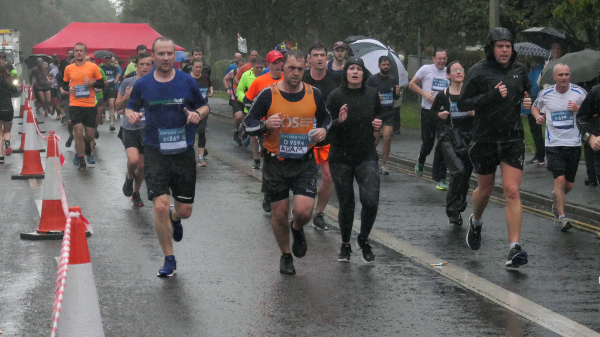 Thousands weather the storm at Oxford Half

Runners may have been forgiven for thinking it was the monsoon season at Sunday’s (13 October) Virgin Sport Oxford Half Marathon but the heavy rain proved to be a temporary distraction at this plastic-free race.

The Virgin Sport Oxford Half Marathon demonstrated its commitment to the environment in two ways: it provided water in recyclable cups at the drinks stations and JUST water cartons at the finish. There were no single use plastic bottles or plastic kit bags.

This was one of several positives about a smoothly-organised and well-supported race that due to its growing popularity operates a ballot system for entries. It attracts runners near and far who are keen to try the fast course through this famous seat of learning and receive a quality medal as a reward. Not to mention the sense of satisfaction from reaching their fundraising targets for local and national charities.

They deserved a medal for turning out in torrential rain on Sunday, displaying a typically British attitude to the weather as they set off at 9.30am from Broad Street. They passed museums, colleges and parks as they continued on a flat route where they were applauded by crowds of spectators who stood out in the wet weather to support the runners.

There was a sophisticated looking medal and T-shirt for every finisher, natural cotton tote bag and a warm glow of achievement.