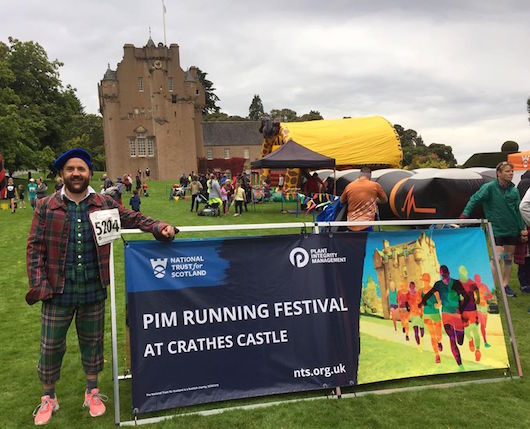 PIM Running Festival at Crathes Castle back for 2020

Entries have opened for the popular PIM Running Festival at Crathes Castle in Aberdeenshire, with early bird rates in force until Sunday, 1 March.

This year’s festival will be held on Saturday, 19 September, and will see the return of all three of its runs.

The main event, the Half Marathon, takes runners out onto picturesque country roads to the north and east of the estate grounds, towards another NTS property, Drum Castle. As reported by runABC Scotland's Christine, who took part in the event last year, the scenic route eventually turns back towards Crathes for a welcome finish in front of the ‘fairy tale’ castle.

The cross-country 5K, now in its second year, is for runners of secondary school age and up. The off-road route heads from a castle-front start into the estate forest and back. A kid’s race will also be held on a child-friendly route around the castle grounds.

As in previous years, the PIM Festival of Running at Crathes Castle will feature plenty of fun for the whole family to enjoy before and after their races.

Although planning for this year’s festival is still in the early stages, organisers told runABC Scotland online that they’ll be ‘strengthening the eco-friendly message’ that was a big feature of last year’s races, when plastic bottles were removed from the race routes and finish line.

As part of their focus on the environment, organisers have also added an entry-system option for runners to fundraise for the NTS though their efforts, to help them ‘protect the landscape they'd be running through’.

Longer term, organisers’ ‘big plan’ is to expand the PIM Festival of Running at Crathes Castle gradually; so runners should expect some more exciting developments in the years to come.