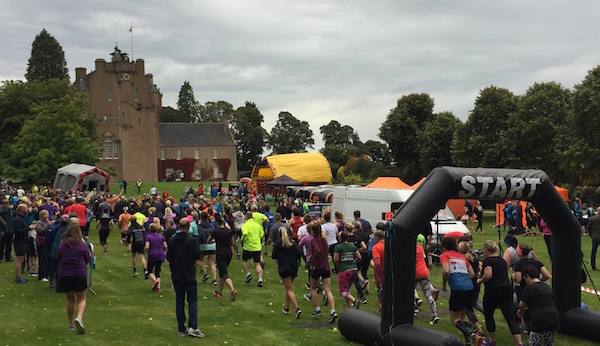 700 get the run of the castle at Crathes

Autumn was most certainly in the air at the new PIM Running Festival at Crathes Castle on Saturday.

Organisers worked hard to make the event – an evolution of the Crathes Half Marathon – more family friendly, as well as to reduce its environmental impact.

Race organiser Paula Sledzinska told runABC Scotland online: “We’re just delighted with how things have gone today. Nearly 200 runners took part in our new trail 5k, just over 100 in the new children’s 1.5k and nearly 400 in our half.

“Our switch from bottles to biodegradable cups and paper cartons to reduce plastic waste was very well received. It was also good to see so many runners bring their own bottles, which we were able to fill at the start and on the course.

She added: “There was also a great vibe in the expanded event village, with activities for all the family. Many runners told me they could hear the drummers as they walked up to the car park, which added to the excitement of the day.”

runABC Scotland Christine ran the PIM Half Marathon as part of her preparations for Loch Ness Marathon.

“Crathes is often called a ‘fairytale’ castle, and that’s certainly true … but given the windy conditions today, I can’t think of any other way to describe today’s race but Beauty and the Beast!

“The route was most definitely a Beauty – absolutely stunning, as promised, with views to the Bennachie range of hills on the first part of the course, then over to Royal Deeside in the second. There are a few long off-road sections too, on good farm tracks, which take you deeper into the Aberdeenshire countryside and break up the pace a bit.

“But the wind was certainly a Beast. I knew we’d pay for the tailwind and the downhills we had in the first section when the course started turning back towards the castle. On the climbs between miles eight and ten I felt like I was standing still.

“But all that just made the finish, probably one of the most beautiful of any race I’ve done, even more welcome. After the climb from around mile 11 to around the 12.5 mile point, it was all downhill on a beautiful tree-lined avenue to the cheering crowds in front of the castle.”

With Crathes being one of the last half marathons of the year in the North-East, local clubs were well-represented, including Aberdeen’s Fit Like Joggers.

Christine was very grateful to club founder Dave, who offered her jelly babies, gels – and a glass of prosecco – from the extremely well stocked Fit Like Joggers tent before the race.

“The gel certainly helped,” she said. “And given the wind, the prosecco might not have been such a bad idea either!”