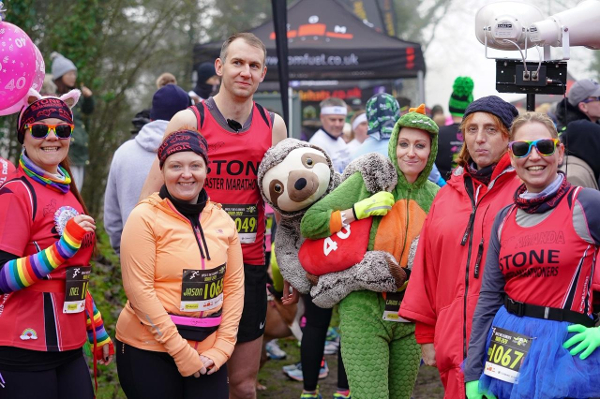 Cool running at Open 2 the Elements

It was a foggy race for 250 runners as they went off-road on a chilly Sunday morning (19 January) in Staffordshire at Open 2 the Elements. However a rainbow made an appearance i– part of the team from Stone celebrating a milestone birthday.

Organised by New2Tri, Open 2 the Elements consisted of a 5K and 10K both of which were held on the pancake flat Stafford to Newport Greenway in Gnosall. The venue for race registration had to be changed with short notice but the local community were happy to help and provided an alternative at Gnosall Village Community Fire Station.

Thankfully, no snow or ice despite it being January as everyone gathered on the Greenway ready to start. There was a lively atmosphere that included the group from Stone MM and Melanie Bath who was marking her 40th birthday at the 10K in a rainbow coloured outfit.

Frances Vickers of Birchfield Harriers was the winning female in 41:43 followed by Fiona Bradley of Stone MM in 45:20. Emma Chadwick of Lawley RC was third in 45:55.

In the 5K, James Jennings of Stafford Tri Club was the winner in 19:00. Natalie Boswell of Cannock and Staffs AC was the women’s winner in 22.24.

Everyone received a bespoke, weather-themed medal and free photos courtesy of Mick Hall.

Race director Simon Warwick thanked everyone involved and singled out the local community for praise saying: “We would like to thank Gnosall village for coming to our aid 24 hours before the race to help with facilities as our HQ had to be moved last minute.”