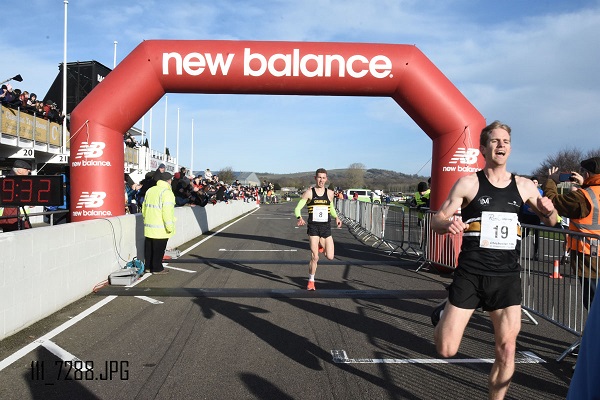 The Rotary Club of Chichester has been promoting this event for 28 years and highlights of the undulating course include the start at the motor circuit entrance in Claypit Lane; the Rolls Royce factory; historic Roman road Stane Street and the unique final 4k lap of the race track to finish on Pits Straight.

There certainly was some rubber laid down in the closing stages as William Mycroft (Enfield & Haringey, 29:32 PB) claimed the winner's trophy by a second from Paul Navesey (Crawley, 29:33 PB). Also inside Richard Allen's 29:45 course record were Andy Coley-Maud (Clapham Chasers, 29:37), Calum Johnson (Bodyworks XTC, 29:38 PB), Peter Le Grice (Bristol & West, 29:39 PB) and Tom Evans (Lewes, 29:44 PB). The UK rankings for the year were rewritten, with Mycroft up to third.

The race included the official trial for an England Masters team to face an international Celtic selection in the Simplyhealth Great Birmingham 10K in May, so there was plenty of interest in the age-group results. Outstanding winners included M40 Neil Boniface (Crawley, 31:14), M50 Tony Wright (Cornwall, 32:48), M60 Paul Mingay (Tiptree, 35:45) and M70 Ron McCullough (Ipswich Jaffa, 41:53).

Steph Twell (Aldershot, 33:17) is world class from 1500m to marathon and smoothly moved to third on the UK rankings behind Eilish McColgan and Jenny Nesbitt with this victory. Twell also replaced Katrina Wooton (33:23) as course record holder. Club-mate Lauren Hall (34:01 PB) was runner-up and Leah Harris (Worthing, 34:55) third on her 10K debut.

There were 415 athletes inside 45mins as the arctic weather eased in time to provide a beautiful winter morning in Sussex. A total of 1,469 finished in 1:33:58 to underline the popularity of this early season 10K blast.