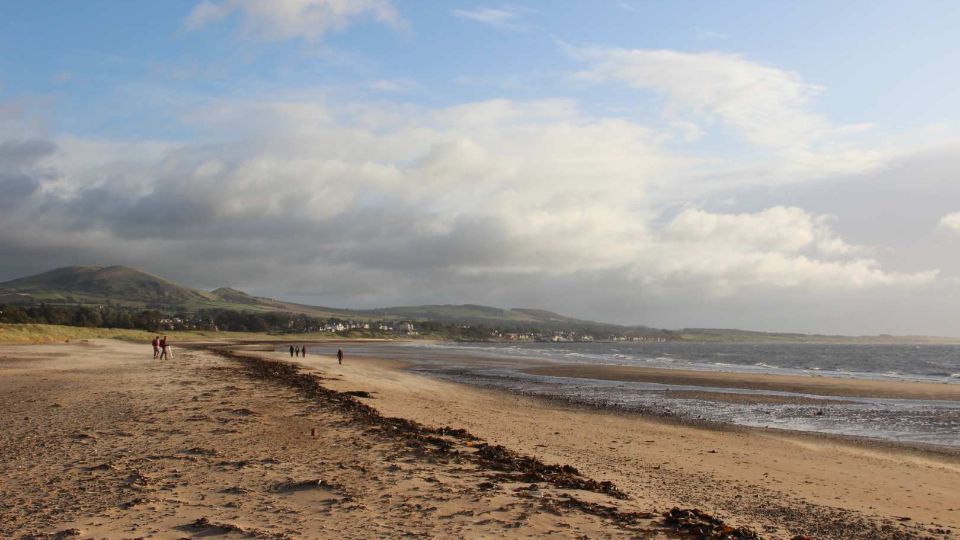 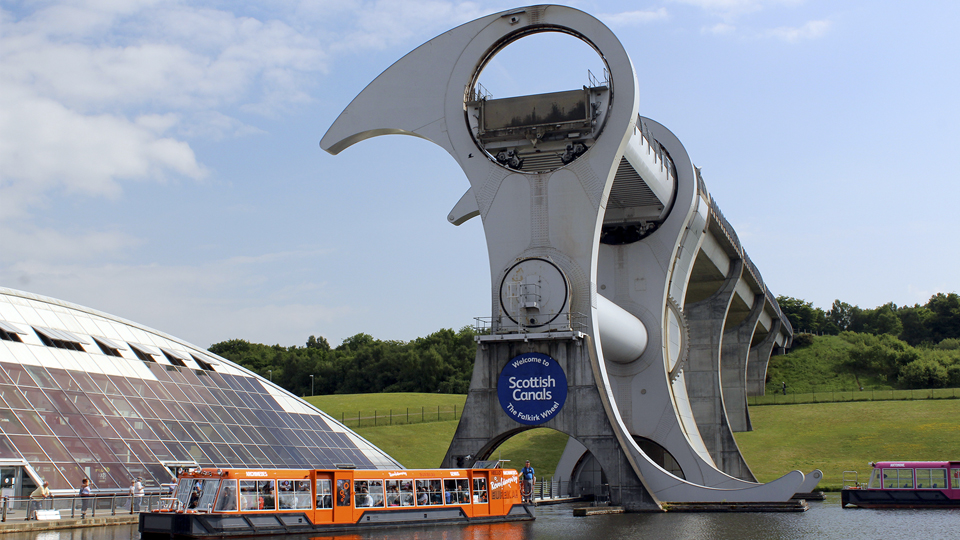 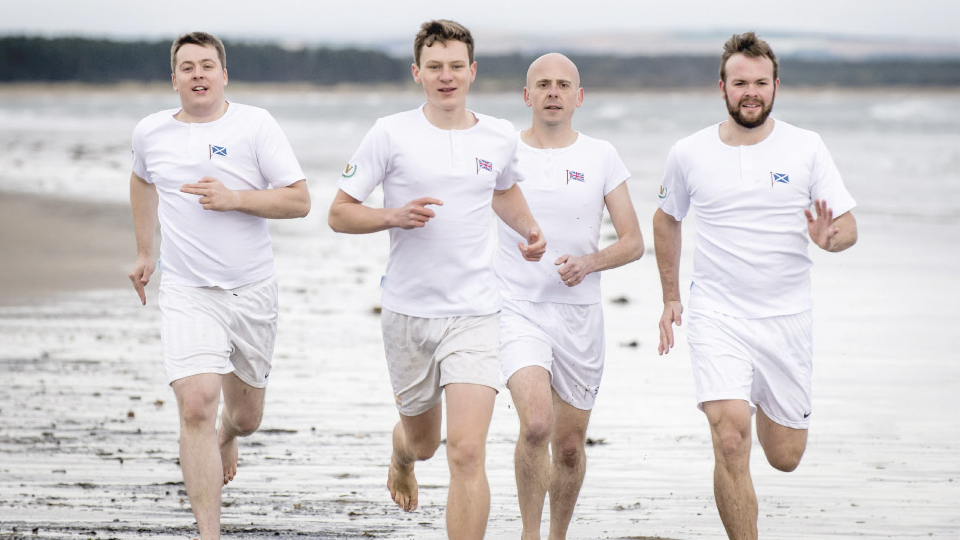 Beach Party On The East Coast 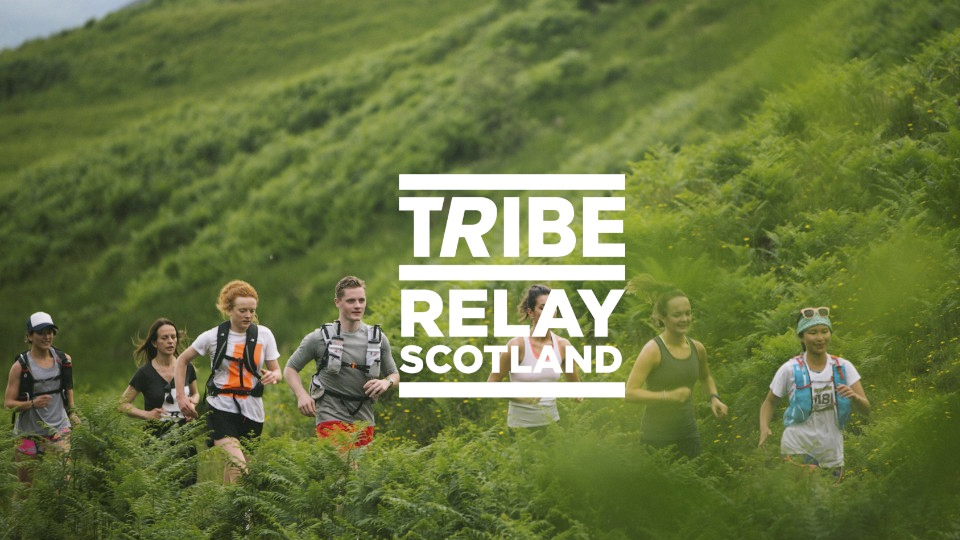 Relay Across Scotland This Summer 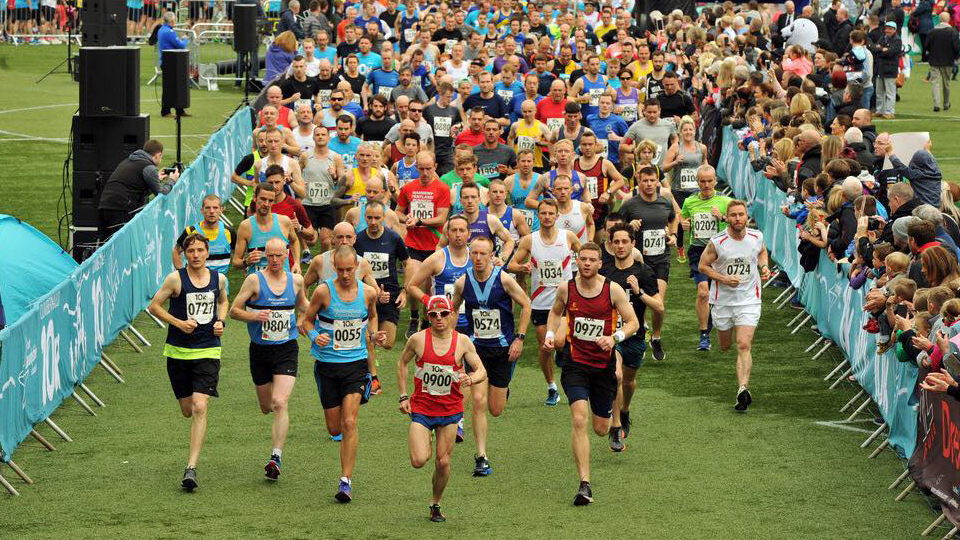 The Festival That's Fun For All The Family 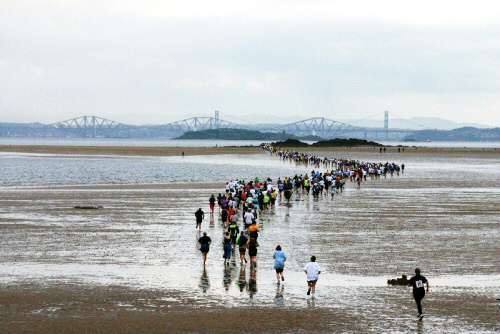 The iconic Chariots of Fire beach run, filmed at West Sands in St Andrews, has made this part of Scotland synonymous with running around the world, but there is more to the area than Hugh Hudson's Oscar-winning film. Boasting a wide variety of terrain and scenery, there is something for every runner - established road races, scenic trails, great canal paths, local parks and dramatic countryside in the form of the Ochils and the Trossachs.

The area's growing running community was given a boost last year with the first Scottish Up and Running store opening in Stirling. Manager, Simon Barlow, and his staff are available to offer friendly and professional advice on running and fitness footwear. The store is already having an impact on the area by sponsoring trail race, the Gartmorn 6 in March, as well as starting its own running group led by Stirling University athletics coach, Gordon Robertson.

Fife and Central is perhaps best known to runners for its number of very successful clubs including Central AC, home of Scottish marathon champion Ross Houston, and Carnegie Harriers whose achievements are as bright as their distinctive apparel. We focus on Fife AC, a club that organises more races than any other in Britain, and talk to member Graham Bennison about life there.

The club has weekly races year round including the Nightmare and Beveridge Park Series. Of the many other events the club holds, one of the most popular is the Devilâ€™s Burden in February which sees 600 runners and almost as many spectators descend on Falkland. Other popular events in the area include the Alloa half marathon in March and the Black Rock 5 at Kinghorn which combines road and beach running. The race takes runners over the sand into the Firth of Forth, and sees participants splashing around the rock before ending with a hilly finish.

Runners are well catered for in terms of training facilities with The Peak at Stirling Sports Village servicing those in Stirling, while we focus on Grangemouth Stadium, widely recognised as one of the best indoor athletics training venues in Scotland. For those starting out in running, there is an ever-expanding list of jogscotland groups you can join. We speak to Mandy Beer who has recently started one such group at Briarlands Farm, near Stirling. 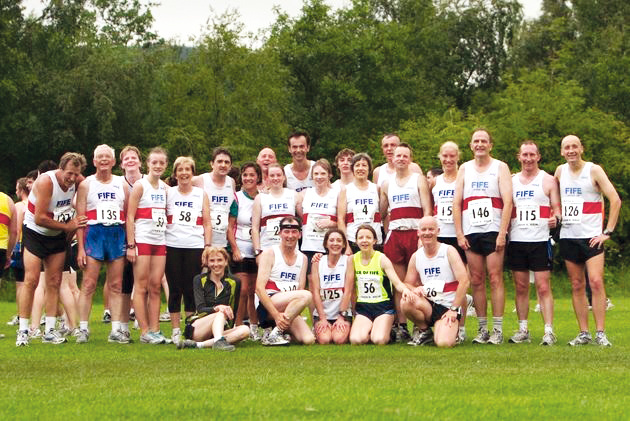 We spoke to Graham Bennison of Fife AC about life at one of Scotland’s biggest running clubs...

Who are Fife AC?
Fife AC was formed in 1972 following the amalgamation of Cupar and District AC and Glenrothes AC. In 1987, Fife Southern Harriers also joined. The aim of the club is to promote all aspects of athletics - track and field, road, cross country, trail, ultra and hill running. It’s also worth nothing that no other club in Britain puts on as many events as we do - just last year we organised 42 races. The key word to describe Fife AC is variety. 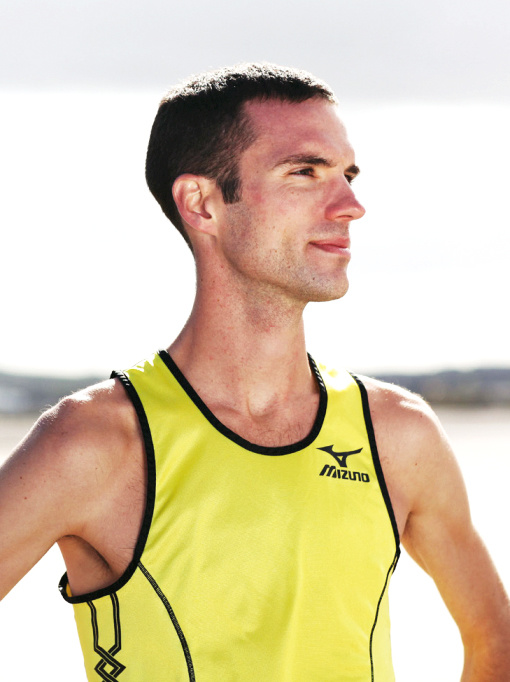 Who can join?
We cater for runners and athletes of all ages and abilities: from complete beginner, to recreational runners to Olympian athletes. Our most famous current member is Andrew Lemoncello (pictured) who came second at last year’s Great Edinburgh Run and is regularly competing in events around the world as he chases a place at the 2014 Commonwealth Games. Although he’s now based in Arizona, Andrew is still very much a member of the club and comes back regularly to see everyone. When he’s back he enjoys training at West Sands and St Andrews and we’re always happy to see him. Going back further we had people like Don MacGregor who ran at the 1972 Olympics in Munich, and Terry Mitchell who, as well as featuring as one of the runners in Chariots of Fire, also won the Scottish Marathon Championships twice.

One to watch?
We have a young member called Halina Rees who we’re very excited about. She’s a woman of many talents as, on top if being a great steeplechaser, she is also a UK ranked 300/400m hurdler as well as doing hill racing, trail running, and cross country.

Your most popular races?
One of our biggest races is the Devil’s Burden’s Relay which took place on 9 February this year. 600 runners take part and, combined with the spectators, there’s roughly 1000 people at it. It involves 6 person teams and is a 4-stage relay. Other big races are the Cupar 5, and our Five Day Tour of Fife. The Tour of Fife is limited in numbers as it’s an aggregate event and it fills up within 24 hours so you have to be quick.

What’s the social life like?
The social side can be difficult due to the size of the club and the fact we don’t have one centre. We have training groups in Kirkcaldy, Glenrothes, Cupar, Wormit and St Andrews, so it’s quite spread out. That’s why fellow member Dave Francis and I decided to organise midweek races. They give people a chance to get together, enjoy the race and have a good chat afterwards. We were one of the first clubs to start putting on teas and cakes after our races, so that certainly helps encourage people to socialise.

Hopes for the future?
Our plans for the future are already being put into place. We have over 300 members and the plan is to have an overhaul in the structure of the club. So instead of having one big committee, we’re going to have a smaller committee with a host of sub-committees. We’re devolving power basically. We’re also working hard developing our website which has recently changed address to www.fifeac.org. The digital side of things is very important for the club and our forum is very active due to the sheer volume of races we organise.

Other Clubs in Central Scotland and Fife

Know of a club we've missed out? Tell us about it here 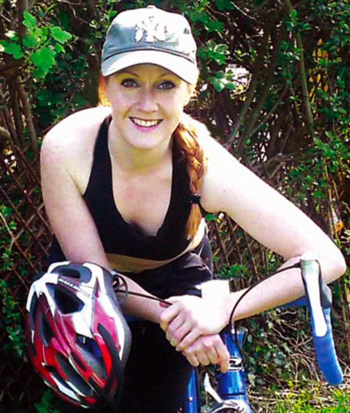 Mandy Beer is duty manager and jogscotland leader at Briarlands Farm in Stirling. As a marathon runner and member of Stirling Triathlon group, she started the group in January this year to encourage people in the area to get more involved with running. She spoke to us about her plans...

I started Briarlands Farm with the aim of encouraging kids to be active and to provide a place for families to come and enjoy themselves. The group just seemed like a natural progression as it allows adults to get involved. I’ve been a runner for several years now and hope I can pass on my knowledge to those just starting out. As the group is brand new, there’s definitely a great opportunity to grow the group further so I’d encourage anyone in the area to give it a try.

Mandy (pictured) leads two different groups – beginners, and improvers - and there is also a children’s fitness class on Fridays. The beginners meet on a Monday at 10am, then Mandy leads the improvers at 11am. She discussed how the first sessions have gone: "I’ve been encouraged by the response so far. At the moment it’s mainly mums who have joined, but it’s open to everyone. A lot of them drop the kids off at nursery then come to the farm for a jog. We do about a mile with the beginners and three miles with the improvers.

We meet at the tearoom which is a great location, then we head along the country road. One of the things I love about this part of the world is the great views you get, it’s so scenic and a wonderful place to run.

As members of the group look to improve, they have set themselves a target of entering a race this year. Mandy explained: "A lot of the beginners are training to do Cancer Research UK’s 5K Race for Life in Stirling, and my improvers are looking at doing a 10k. We’re a friendly bunch and after the runs I invite people back to the tearoom for some food and refreshments. There are healthy options too so it isn’t something you need to feel guilty about doing." 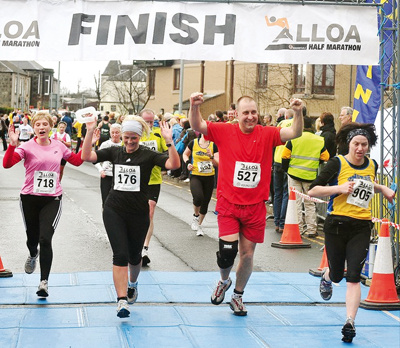 Although they have only been running for a short time, Mandy has already seen an improvement in some of her members, saying: "One member, Gail, from the beginners class told me she was a complete novice but her performances have really impressed me. She’s looking towards the 5k race and has told me she’s determined to run the whole thing. I love that attitude, it’s really inspiring.

In the improvers group there are a few ladies who are really pushing themselves. They tell me they’re annoyed if they don’t get the time they’re wanting and they’re just very focused on improving their running.

With such a positive response in the group’s initial period, Mandy hopes bigger things are on the horizon: "I’d like to expand the group and I’d also like to get Jog Scotty, the jogscotland mascot, along to the kids class. I had him along for a fun run I organised once and the children loved him. I’d like to hold a juniors group too for older children.

We just want to make visiting Briarlands Farm an enjoyable experience and the running groups are a big part of that. It’s a beautiful area for running, it’s about time someone utilised it."

Runners need services such as physiotherapists and podiatrists to keep them injury free and on the go. Cameron Physiotherapy is a Fife-based company, with clinics in both Glenrothes and Dunfermline.

Cameron Physio cater for people from all walks, within any field from sports injuries to chronic pain management. Their staff are trained and experienced in treating all these areas. They are confident that patients will find them both professional and friendly.

Services in Central Scotland and Fife

If you offer a serivce to runners in Central Scotland or Fife and would like to be included on this page, please contact us. 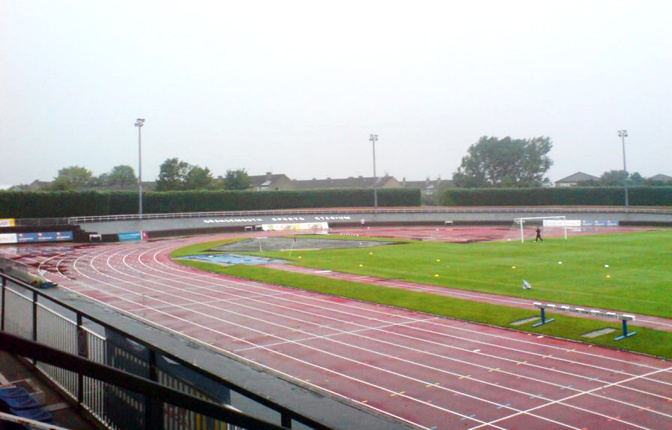 As a certified UK Athletics Grade 1 Stadium, Grangemouth is an ideal location for track running. The stadium was the first all-weather track surface in the UK and has established itself as one of the busiest athletics stadiums in Scotland, hosting many regional, national and international events.

It is also home to the UK’s first purpose-built Indoor Athletics Academy. Opened in 1997, the academy was further extended in 2003 doubling its size to over 2100 square metres as well as adding increased changing areas. The indoor academy has a training area featuring weights, plyometrics, track and field and gymnastic equipment.

The stadium hosts the annual Celtic Cup International Athletics event, which features a Scotland vs Ireland vs Wales match. Athletes such as Merlene Ottey, Darren Campbell, Jason Gardner, Alan Webb and Craig Mottram have all competed in the tournament.

Have we missed something? Tell us what we've missed here