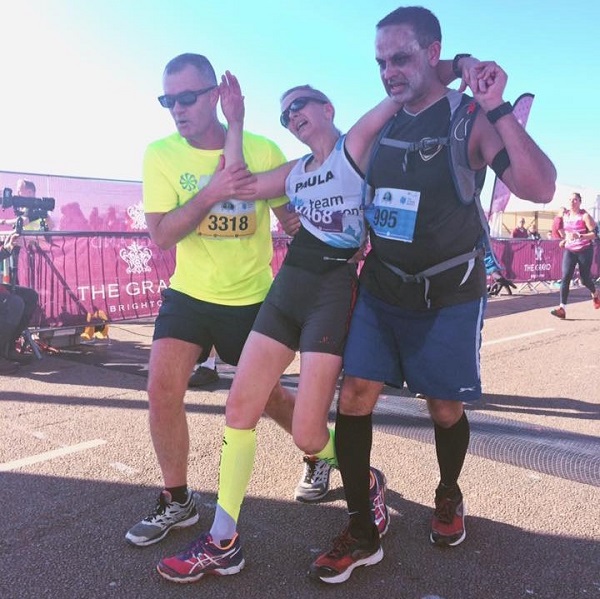 Modern day good Samaritans, Richard Cruse (#3318) and Achuth Hosur (#995), came to the rescue when Paula Elphick (#8468) found her legs had gone on strike with a mile to go in The Grand Brighton Half Marathon, held in unexpectedly warm weather on Sunday (24 February).

In a field of 7,500 runners the fickle finger of fate brought three strangers together at exactly the moment when one needed some support. Despite starting out separately and clearly heading for different times, Richard and Achuth were in just the right place at the right time to catch Paula as she was about to fall victim of the warm weather, causing severe cramp and dehydration.

Paula takes up the story of her half marathon experience on a birthday to remember: “It was just so warm and I didn’t drink enough water! Feel absolutely fine now and thanks to the two amazing total strangers who helped me finish. One grabbed my hand with about mile and a half to go as I had bad cramp and he and the other guy just literally carried me over the finish! I am so grateful for him sacrificing his race for me”.

Paula (3,912nd in 2:04:44) was among the 7,398 finishers in 4:10:00 on chip timing. Oblivious to all the drama and apparently impervious to the heat were the elite athletes who were carving out a terrific pace at the front.

Perhaps fittingly in the circumstances, the official starter this year was Matthew Rees, AKA The Welsh Runner who gained fame himself by stepping in when a distressed runner needed a helping hand in the Virgin Money London Marathon.

Image courtesy The Grand Brighton Half Marathon on Facebook