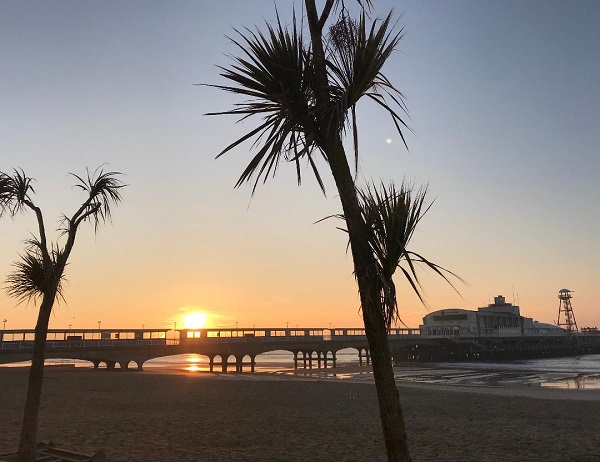 Course record bonuses of £50 were paid to race winners Craig Palmer (Bournemouth AC, 55:01) and Jen Elkins (Southampton AC, 58:26 PB) at the Bournemouth 10 mile road race sponsored by 854 Dental Health, on Sunday morning (24 February). Whether the race director had a Hollywood smile as the cheque book was flourished is not known but the successful athletes were certainly chuffed with the outcome!

With Bournemouth looking more like Barbados, especially as the sun rose over the pier with stunning views of the seafront promenade, it was perhaps a blessing this race had an early start at 8:30am. Despite the 10 miles distance not having the same drawing power of its near relations of 10K or half marathon, a capacity entry of 700 runners had been received.

The race start is on Undercliff Drive beside the new Victorian pier, opened by the Lord Mayor of London in August 1880. The course is essentially flat for the first six miles, then a bit lumpy around Boscombe before a flat run back to the finish.

The course records that were under fire were 55:13 by Steve Way (2017) and 61:13 by Emma Dews (2016) and the former was in doubt until the final surge for the line by Palmer, who had his Bournemouth clubmate Rob McTaggart (55:24) to thank for helping with the pace.

In contrast to the tight men's finish, Elkins had a cushion of more than seven minutes over W35 Helen Southcott (Maiden Newton Runners, 65:41 PB) and W45 Diana Leggott (Lonely Goat RC, 65:48) who were scrapping for runners-up spot.

In case you were wondering, Lonely Goat Running Club is an online running community open to everyone with hundreds of members – so not so lonely after all!

Our image was supplied by early arrival Des White (Exmouth Harriers, 71:47) who celebrated his recent entry to the M65 category with an age-group win and some inspiring photography.

The Bournemouth 10 was the third race in the Dorset Road Race League, incorporated the Dorset 10 mile Championships and was part of the Imperial 10 Mile Series.