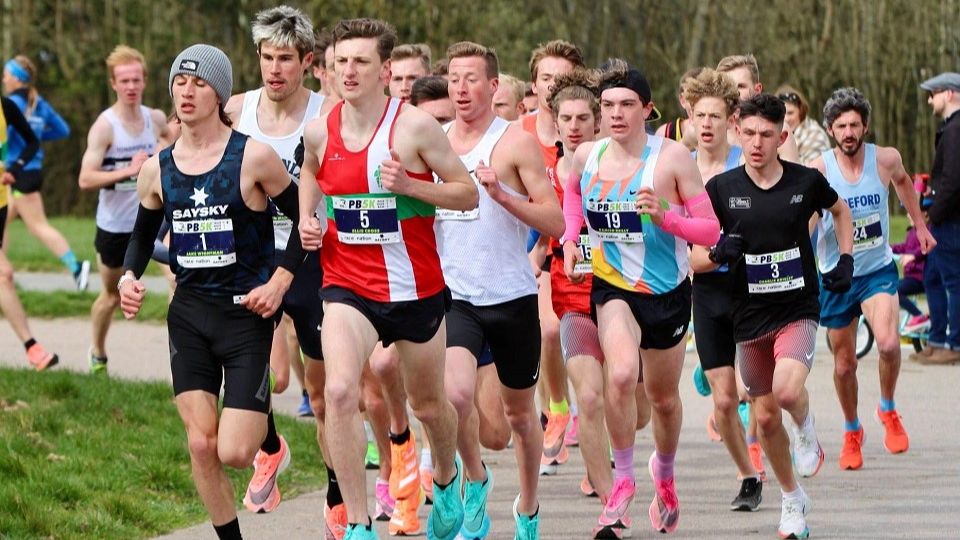 Runners in a hurry in a flurry of 5K action

There has been a flurry of fast 5K races since Boris put the B in the Bang of the starting pistol report that sounded the resumption of athletics and running competition on Monday 29 March.

First off the blocks was the Comeback 5000 track series at Battersea Park on Wednesday 31 March – as reported in runABC – with eight races enjoyed by over 100 athletes and elite race wins for Jenny Nesbitt (Cardiff, 15:46.62) and Phil Norman (Woodford Green, 13:46.80 PB).

Down in Devon, the Fast Friday 5K and 10K had 91 and 157 finishers respectively. The flat Exeter Riverside course was changed for the lumpy but Covid-secure Exeter Racecourse on top of Haldon Hills. The 5K winners on Good Friday 2 April were Oliver Smart (Tavistock Run Project, 14:46 PB) and World Para Athletics Championships 1500m athlete Hannah Taunton (Taunton, 17:32), while the 10K victors were Ben Holmes (Exeter, 32:29 PB) and Elle Twentyman (Taunton, 37:21).

On Saturday night (3 April) we saw the astonishing breakthrough by Shaftesbury Barnet Harrier Beth Potter at the Podium 5K at Barrowford, Lancashire. The Scottish triathlete blasted out a world record 14:41 subject to ratification in a mixed elite race won by Tom Mortimer (Stroud, 13:39 PB).

On Easter Monday 4 April the action moved to the aptly-named Fast 5K at Three Sisters Race Circuit – normally used for go-kart racing – in a cold and blustery Wigan. This was an elite-only affair live-streamed by Athletics Weekly with impressive victories for Aldershot, Farnham and District's Richard Allen (14:05), and 29-year-old double Olympian Laura Weightman (Morpeth Harriers, 15:30).

Finally, the ever-popular parkrun distance was also enjoyed by 600 runners at the PB 5K at Ardingly Showground, Sussex on cold and breezy Easter Bank Holiday Monday. Aldershot's Ellis Cross (14:05), pictured wearing #5 leading above, led 15 men inside 14:30 and Sara Astin (City of Norwich, 16:13) was the leading lady as the top dozen women ran 17:00 or faster.

It seems that our finely-tuned athletes simply couldn't wait to test their lockdown training and super shoes bought online and gathering dust until these opportunities came along. It looks like it is going to be a fast and furious summer, culminating in the postponed Tokyo Olympics.