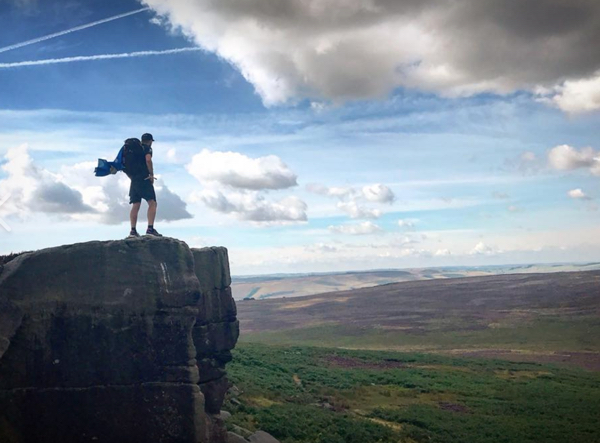 Ben Davis is on course to complete one of the most grueling feats of endurance running Yorkshire has ever seen. The 31-year-old is nearing the end of a challenge that has seen him run the perimeter of the county, a distance of approximately 450 miles and an ascent of over 41,000 feet.

After setting off on Yorkshire Day (1 August), Ben has travelled from Scarborough and taken in Cleveland Way, Yorkshire Dales, Humber Bridge and Spurn Point. His anticipated return to Scarborough on 19 August will have seen him cover the equivalent of a marathon a day.

As part of his challenge, Ben is aiming to raise £20,000 for the charity Campaign Against Living Miserably (CALM) which is dedicated to preventing male suicide. He decided to take on the #RunningYorkshire challenge after suffering a period of poor mental health.

Speaking of his motivation, Ben said: “I very quickly went from feeling a bit down to locking myself away for days on end. I would break down and cry without warning. It severely affected me. I desperately tried to hide how I was feeling and thought it was something I had to face on my own - I was embarrassed. Fortunately, I was surrounded by loving friends and family, and within a few months, I managed to get my life back on track."

Director and trustee of CALM, Marcus Chapman, said: “Ben’s monumental challenge to run around Yorkshire will without doubt save lives and help CALM in its fight to reduce male suicide - at 84 men a week, still the single biggest killer of young men in the UK.”

To support Ben throughout his journey, Up & Running, the Yorkshire-based running specialist, has supplied various pieces of kit to make his adventure as comfortable as possible, from his Saucony Hurricane shoes and Groundhog socks to the Terra Nova tent and Montane pack and apparel.

General Manager of Up & Running, Jonathan Midwood, said: “We are pleased and in fact humbled to be part of Ben’s epic journey. Having personally been in the same place as Ben, and knowing others who have had similar experiences, we just couldn’t wait to support him.

As the end of his challenge nears, Ben is on track to complete his fundraising target, which he has set at £20,000. You can donate here.