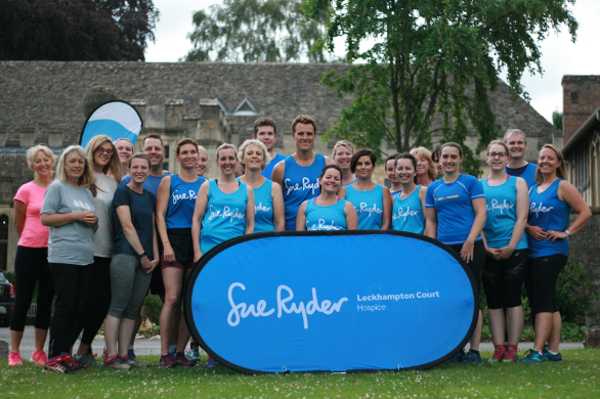 Olympic rowing champion James Cracknell has lent his support to a charity running club preparing for Cheltenham’s Half Marathon. Known as ‘Team Incredible’ they are fundraising for Sue Ryder Leckhampton Court Hospice.

The twice Olympic gold medallist, athlete and adventurer joined the club at one of their weekly training sessions as they gear up for next month's event. He has completed numerous marathons and drew upon his experience to offer tips and advice on how to tackle the 13.1 mile distance – the next step for the team who have progressed from Couch to 10K.

Team Incredible Leckhampton Running Club to give them their full title was set up by the Cheltenham branch of the Sue Ryder Hospice Care to train for the half marathon. Taking part in regular training runs from the hospice grounds in Leckhampton and assisted by personal trainers who will ensure they are fit and ready for the Cheltenham Half.

Amongst the team is Community Fundraising Manager at Sue Ryder Leckhampton Court Hospice, Kelly Rumble who has personal reasons for entering the race. Her mother passed away in 2004 aged 52 from cancer; but the kindness and compassion shown by the hospice was of great comfort to Kelly and her family during this time. She is running the Cheltenham Half to raise funds for the hospice...” As a family we all went through a complete rollercoaster but we were so very grateful for the care mum was given by Sue Ryder.”

The Still Moving Cheltenham’s Half Marathon and Community Mile takes place on Sunday 30 September at 9am. Visit the website for more details.