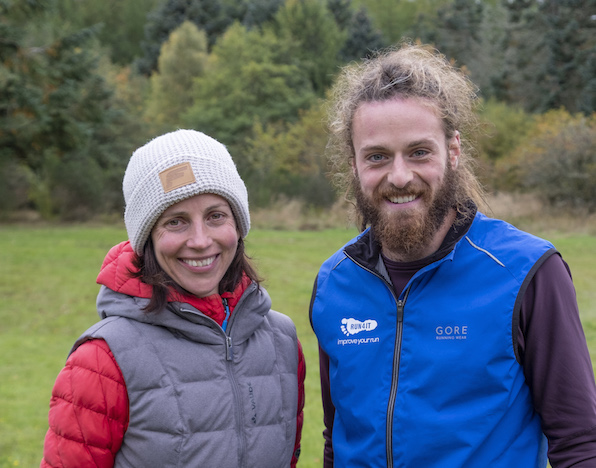 The 8.2-mile race, which takes in many of the ‘tops’ of the iconic Bennachie range, attracts both seasoned hill runners and road runners from across Scotland.

There was a bit of an upset in the women’s division, when Veronique Oldham, winner for six of the last eight years, finished second. Oldham was bettered by Deeside Runner Clare Whitehead, who last won the women’s race in 2002, when she set the course record.

Former Scotland international hill runner Clare said: “It was great to be back racing at Bennachie. I wasn’t really planning on going fast today, but then I thought if I don’t go faster, I’ll get beaten!”

The men’s race was won by Hamish Battle, who came second last year to Commonwealth Marathon bronze medal winner Robbie Simpson. The Metro Aberdeen runner, who finished over four minutes ahead of second-place Chris Hill (Cosmics), said: “It was really windy up there today. But I knew that some of the others were running well at the moment, so I pressed on up the hills at the start to get an early lead.”

The ladies’ team prize was won by Deeside Runners, who also made a clean sweep of the female veterans’ prizes; the men’s team prize was taken home by Metro Aberdeen.

The Bennachie Hill Race is the third and final race in the Aberdeenshire Hill Race series, along with Morven and Cairn William. The women’s prize for the fastest time in the three events went to Marie Entwistle (Deeside); the men’s went to Paul Knight (Metro Aberdeen).

Chair of the Garioch Roadrunners and race director Nicola Redgwell said: “Our club is so proud to have hosted another successful Bennachie Hill Race, and to have raised funds for both Aberdeen Mountain Rescue Team and the Bennachie Centre’s defibrillator campaign in the process.”

“We had a great turnout today, too, with runners of all abilities – despite some pretty dire weather forecast. We’re already looking forward to next year, and the 30th birthday of an event whose popularity continues to grow.”