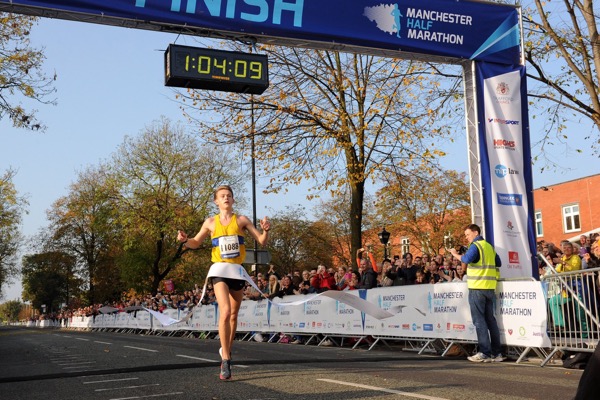 Battle Of Britain lined up At Manchester Half Marathon

Two of the UK’s top male endurance runners, Luke Traynor and Andy Vernon, will be battling it out in what promises to be an intriguing contest at the upcoming Manchester Half Marathon. The pair will be part of a 14,000 strong, sell-out field on Sunday (14 October).

Traynor burst onto the scene at Manchester last year with victory in what was his debut half marathon. The Scottish athlete clocked 64:07 at Manchester, a performance that set the foundation for his 61:55 at the Barcelona Half Marathon in February this year – a time that also placed him third in the all-time Scottish rankings.

Traynor produced a strong performance at the recent Great Scottish Run (where he faced an in-form Chris Thompson). Now the Giffnock North AC athlete has set his sights on defending the Manchester title: “I am really excited to be going back to compete in the Manchester Half Marathon.

“Last year was my first ever half marathon and it was a brilliant experience. It’s a super flat course and the atmosphere was awesome. This year is going to be even better and faster, I hope, as I’m aiming to break my own course record.”

Lining up against – and likely to be one of Traynor’s closest competitors – is Andy Vernon. With a very successful summer track season under his belt, he finished 5th in the 10,000m at the European Athletics Championships in Berlin, Vernon is hitting the form which saw him produce a half marathon PB of 62:45 four years ago.

On the upcoming event, Vernon said: “It will be the first time I've taken part in the Manchester Half Marathon which is an event I’ve heard great things about. It’s a half marathon that is starting to attract lots of top club runners as the course is famously fast and flat. There are some great competitors this year, so it should be a fantastic race.”

The Manchester Half Marathon is gaining a reputation for its flat profile and, with just 41metre elevation across the 13.1mile course, offers a high PB possibility. This year’s field is a sell-out, with up to 14,000 runners expected to line up at the start point at Emirates Old Trafford Lancashire County Cricket Club.