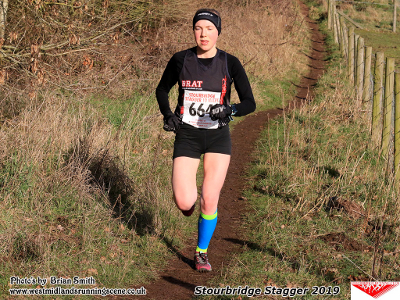 Anne Kenchington kept her feet as she became the fastest female at the 2019 Stourbridge Stagger 10 Mile (Sunday 3 February). Anna took on this steep challenge and won.

There were nearly 500 entries in the 10 mile race and a further 85 in the 7k – making it the biggest turnout to date. The weather was cold and bright as runners gathered at the start line in Mary Stevens Park in Stourbridge, ready for the off at 10.30am and a tough, hilly course that does not take any prisoners.

One of two races from Stourbridge RC, the other their summer Stumble, the Stagger is 10ish miles on a multi-terrain route consisting of footpaths, bridleways and fields. Anne Kenchington of BRAT was always prominent and ran strongly throughout, racing to a win in 1:09:52 (23rd overall). Her teammate Annie Bryne finished 8 seconds behind in 1:00:00 followed by Tracie Trueman of Lawley RC in 1:14:42.

Feedback has been positive about the Stagger, in particular the high standard of marshalling and the supportive, friendly atmosphere that helped runners right to the end. This important annual event benefits Stourbridge RC as well as the running community and long may it continue.