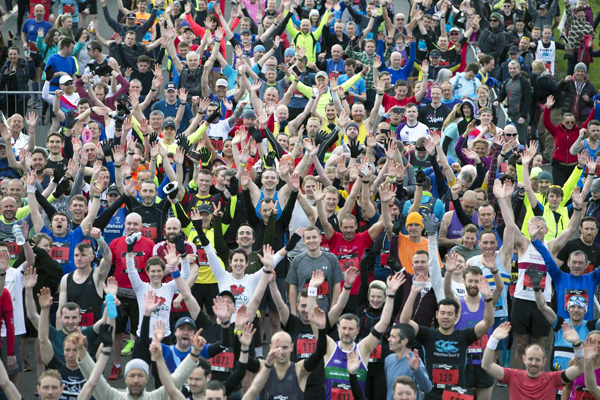 Thousands of Scottish runners are working towards the big marathon date of Sunday 28 April in Stirling. They are now set for the key weeks of their training programme in the remainder of February and in March ahead of an April taper.

The feature 26.2 mile race at the Simplyhealth Great Stirling Run is close to a sell-out however places are available for the half marathon which, after a successful introduction last year, returns for 2019. Plus Stirling will this year host a unique kids' double header with the Family Run, where 3-8 year olds can get involved and have the chance to win their own medal, and the colourfully named Maukit Run (9-15 years) where the kids can really let loose as they make their way through various obstacles.

Both senior races combine a scenic course with the convenience of a city centre start and finish. The challenging closed road routes takes in the local Stirlingshire countryside, imposing castles and historic towns.

The marathon route passes Blair Drummond Safari Park before crossing the historic Bridge of Teith. The route continues through Doune and on to Dunblane. Runners then follow the old A9 to Bridge of Allan and a circuit of the University of Stirling campus.

The next highlight is the historic Wallace Monument then a long, scenic section on Hillfoots Road before returning along the riverside to Stirling and a city centre finish.

The half marathon also starts in the centre of Stirling on Millennium Way (A84), a stone's throw from the iconic Stirling Castle, and takes runners on a 13.1 mile tour through the city and out towards the Ochils. With stunning views, rolling countryside and a fantastic finish line on King's Park Road, the half marathon distance is the perfect option to build up to a full marathon target in 2020.

The event was an outstanding success in 2018 with actor Sam Heughan providing the star appeal. The Outlander hero enjoyed passing some of the locations where the hit TV show are filmed including Doune Castle. Heughan clocked a very respectable 3:13:37 and post-race he tweeted: "Thank you for all the support along the way, Outlander fans. I loved the friendly volunteers, cheers of encouragement and, of course, the bagpipes!! What a beautiful run (minus the hill at the end!) Broke my PB with just under 3.15! Thank you Stirling!!"

Other heroes on the day were Central AC's Michael Wright (2:29:19) and Fife AC's Alison McGill (3:02:35) who claimed the 2018 Scottish championship titles (Stirling Marathon doubled as the championship race). Corstorphine's Michael Crawley (1:09:33) and Edinburgh AC's Sarah Brown (1:26.58) led home their fields in the inaugural half marathon.

For full details of the Simplyhealth Great Stirling Run go to the event website.