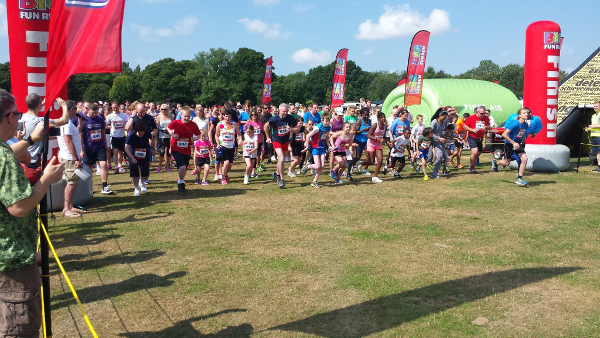 All In Good Run At Nottingham

Colwick Country Park was the location for Sunday’s (22 July) Big Fun Run Nottingham with sunshine and laughter on the day and many people taking part to remember a loved one.

The Big Fun Run Nottingham is part of a 5K series involving 20 locations across Scotland and England that started in July and ends in October. These events are not timed and people of all ages and abilities are encouraged to enter on their own, with family or friends. There is a non-competitive ethos and entrants can walk, jog, run or even dance their way around the course.

Whilst the emphasis was on fun, there was a serious aspect to the event which fundraises for charity. There were hundreds of affiliate charities to choose from including Cancer Research UK, Make A Wish Foundation UK and Sands and since 2007, more than £5 million has been raised thanks to the Big Run series.


Amongst those running for charity was Francesca Wells and her 9-year old son on behalf of the British Lung Foundation. Francesca’s mother Kathleen passed away from COPD (Chronic Obstructive Pulmonary Disease) in May 2016 and her grandson wanted to run in her memory and in aid of this charity.

A Big Fun warm up at 10.45am got everyone ready to go at 11am and following an attractive route on tarmac paths and a small grass section around the Country Park. This included a lap around the Central Lake and two laps around the smaller West Lake. They were greeted at the finish line by a friendly team who presented each runner with a Big Run medal, goody bag and bottle of water.