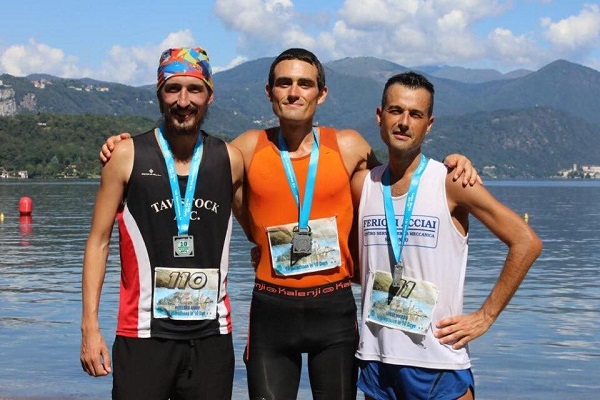 Holland takes Italy in his stride

Adam 'Tango' Holland (pictured above #110) has recently returned from his latest mind boggling feat of endurance: the Lake Orta '10 in 10' in Italy. Britain's most prolific marathoner took the overall title with 30 hours 21 minutes 42 seconds for 10 marathons in 10 days but it was no walk in the park...

Adam is the fastest '10 in 10' exponent in the world, with an average of 2 hours 45 minutes, and he won the Lake Orta '10 in 10' last year without going over three hours for any of his races. However, the defending champion certainly did not cruise to victory this time around.

The course record holder at Orta bruised his hip after running into a bin on day one and may have considered binning his attempt at retaining his title after struggling with the injury for a few days. 'Tango' started with 2:50:15 and was then reduced to 3:23:04; 3:32:39 and 3:03:26.

It may not have been vintage 'Tango' but it was certainly a victory over adversity. The winning margin was 1:14:47 – around 11 miles at 'Tango' pace – with elite Italian ultra runners Giorgio Calcaterra (31:36:29) and Marco Rossi (32:12:09) his nearest challengers.

To put this latest achievement into perspective, Calcaterra is triple world and three-time European champion at 100K with a 2:13:15 marathon PB. In 2016 he ran 88.44K to become the overall winner and world record holder for the Wings for Life World Run.

Adam Holland is no stranger to records himself, as the youngest person in Europe to complete 100 marathons (aged 23). He has won more marathons/ultras than anyone else in Britain and is ranked in the top five worldwide with more than 260 marathon victories. He has even run 183.86 miles in 48 hours on a treadmill!

And as for that nickname – 'Tango' loves Jaffa cakes. It has nothing to do with his perma-tan!