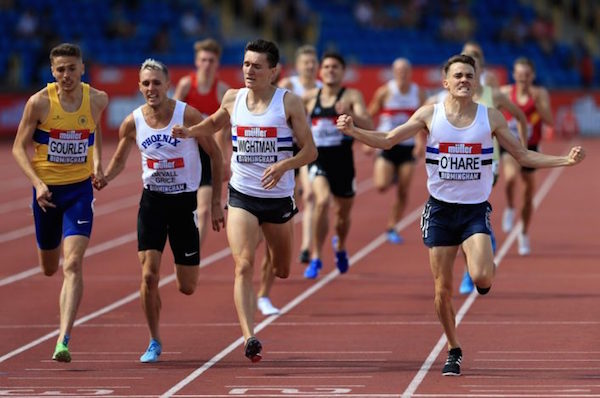 Scots hoping to head to Doha via Birmingham British Champs

Some of the biggest names in Scottish running will be competing at the Muller British Championships this weekend, hoping to secure both British titles and their places on the GB&NI team for the IAAF World Championships in Doha later this year.

Both athletes and their supporters are hoping for a repeat of last year’s outstanding performances at Birmingham’s Alexander Stadium when three Scots – Chris O’Hare, Jake Wightman and Neil Gourley – dominated the podium of the men’s 1500m.

All three will be racing the distance again this year, along with Josh Kerr to keep them on their toes. Kerr, along with Wightman and Gourley, are in fine form and certainly in the running, each having already achieved the 3.36.00 standard required by British Athletics.

As one of the five competitors who have already met the women’s world standard time for the 5000 m, a strong performance is also expected of an on-fire Eilish McColgan.

Despite the depth of Scottish talent that will be taking to the track over the weekend, two of our most decorated female athletes will, however, not be taking part.

Now expecting her first child, Eilidh Doyle will understandably be giving a trip to Birmingham a miss.

Also sitting this one out is double European Indoor Champion (1500m, 3000m) Laura Muir. She is dealing with an injury to her calf, picked up during competition this summer.

Final decisions about who will be travelling to Doha for the World Championships are expected around 3 September.