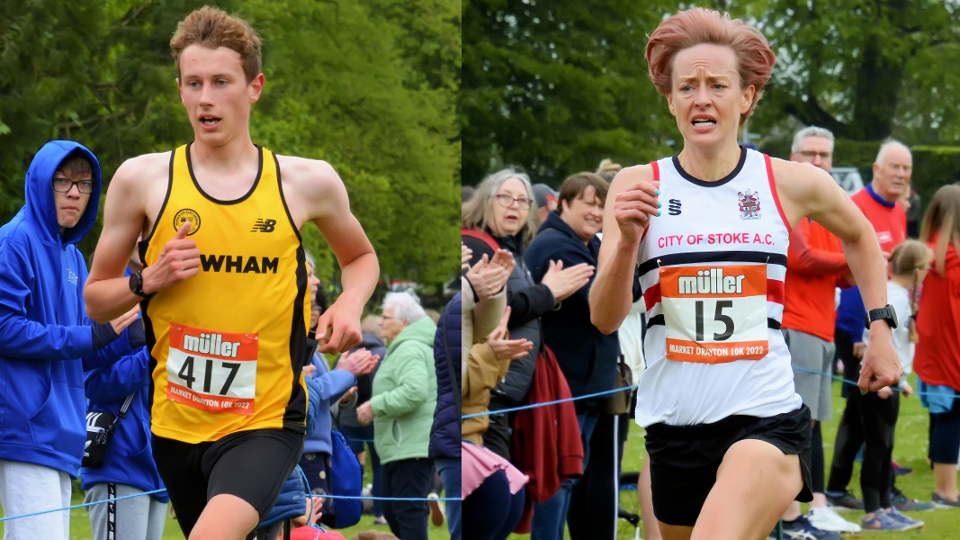 Victories for these two at a race known for its lively support.

Business as usual as the Market Drayton 10K (Sunday 8 May) returned to its May slot and there was a spring in everyone’s step at this Shropshire crowd-pleaser. A good day was had by all especially Jacob Cann and Donna Sherwin...

For many runners (including this correspondent!) this race is their favourite 10K for a number of reasons that include the organisation, course, marshals/volunteers and the local support. Not forgetting of course, the goodies at the finish. The Muller yoghurts went down a treat along with other food items handed out to runners as they made their way through the funnel.

The day began with the Palethorpes Bakery Fun Run at 9.45am, open to children up to the age of 14 with trophies for the winning boy and girl in each age category. A medal and goody bag was given to every finisher.

Then it was the turn of the 10K. A warm up at 10.40am was followed by runners filing into the start area, ready for the off.

Jacob Cann and Donna Sherwin were at the front of 1,500 runners, grouped in pens according to their estimated finishing time on the field at the Grove School in cool, overcast conditions. There were pacers on hand to help people achieve their target time and their encouragement along with that from the residents of Market Drayton paid dividends in the form of PB’s.

Away they went around the edge of the field before exiting onto the road and a course that was flat in the first half followed by undulating sections and a ‘sting in the tail’ in the form of Phoenix Bank. Crowds lined the pavement, cheering them up the hill and on to the finish on the Grove School field.

Good, fast racing from Jacob Cann of Newham & Essex Beagles AC saw him win the 2022 Market Drayton 10K in 31:04. Matthew Costello of Shrewsbury AC was nearly a minute behind as he took second place in 32:00 with James Skelton third in 33:06.

City of Stoke AC had two reasons to celebrate: a strong performance by Donna Sherwin resulted in her winning the women’s race in 36:00 followed by teammate Nia Nokes in 38:43. Michelle Fox of Stone Master Marathoners (Stone MM) was third in 40:13.

A complete set of results is available to view via the runABC Midlands Race Listings page.

Nomad – No.63 Cellar and Tasting Room offered every runner a free glass of fizz - perfect for toasting individual success or as a post-race reward.

Entries have already opened for the 2023 MD10K. Visit the Market Drayton Running Club website for details.