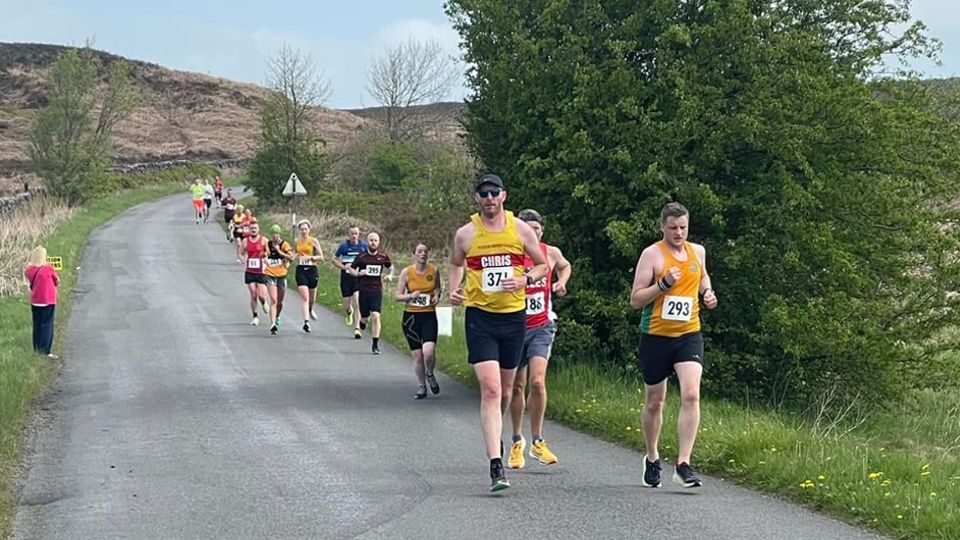 Running on high at Holymoorside

The 10K's return was marked by a new female course record.

There were rolling road closures and a rolling hill at Sunday’s (8 May) Holymoorside 10K, back after two years away due to the pandemic and welcomed by all. The vast array of cakes in the HQ was a sweet reward for the hard work and effort.

It was the 11th outing for the Holymoorside 10K & Fun Run in Chesterfield, Derbyshire and accompanied by sunny, spring weather that made for a winning combination! Not least for women’s winner Caroline Brock...

The Steel City Striders runner was part of a 300+ strong field at this arduous and attractive event from the 1st Holymoorside Scout Group. The Scouts motto is ‘be prepared’ and many of the runners mentally prepared themselves for the 4K climb up Loads Road through scenic countryside to Longside Moor.

There was a 2K Fun Run at 10am involving 6 laps of the playing fields next to the Village Hall followed by the 10K race at 10.30am. This was held on quiet country lanes with a closed road system operated by Vocon Traffic Management and cheerful, efficient marshals also helped to keep runners safe.

Uphill was followed by undulations across the Moor before a chance to get your breath back ready for the downhill section into Holymoorside village: then a lap of the playing fields and a fast dash across the finish line.

Dave Archer (Unattached) shot across the line in 33:56 followed by Robert Smith of Hallamshire Harriers in 34:08. Tom Shaw of Dronfield RC was close behind, finishing third in 34:11.

A strong performance by Caroline Brock of Steel City Striders RC resulted in her being crowned first female in 39:41 with a new course record.  Hayley Gill of Matlock AC was second female in 40:14 and Natalie Neville of Hillsborough & Rivelin RC third female in 42:33.

View all the results via the runABC Midlands Race Listings page.

Running was followed by refuelling with tea, coffee, a bacon sandwich and cakes.