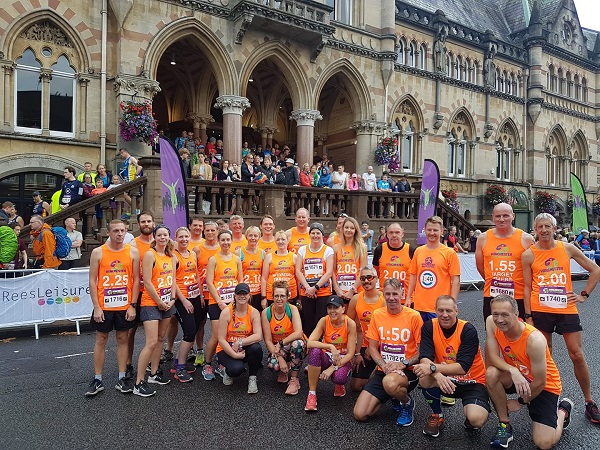 There were 1,364 classified finishers in the Winchester Half Marathon in 3:38:19 on Sunday (22 September) where the main talking points were the hills, heavy rain, eye make up and the wonderful Target Timers (pictured above).

Nina Metson (Jogging Made Easy, 2:32:39) finished 1,253rd and was among many competitors who were fulsome in their praise for the 30 volunteer Target Timers and all the encouraging marshals around the scenic course. She was equally impressed with the enduring powers of her eye make-up, as her post race comment shows: “Massive thanks to the 2:35 pacers, they were right there through the hard miles and I finished in 2:32! And my eyeliner stayed put”!

Rimmel in case you were wondering and a PB by an impressive 4:31! Nina's previous best was 2:37:10 at Colchester in March. It always intrigues this writer what people discuss on social media after taking part in these great events.

The Winchester course is shaped like the knight in a game of chess. Appropriate as Winchester is the ancient capital of England, where Egbert the first King of all England was crowned in 827. The statue of King Alfred the Great is among many historic features on the route.

First to climb the 100m ascent in the opening two miles was Peter Concannon (Chichester) who was to pass 10k in 37:29 en route to a half marathon debut in 1:20:24, despite nearly getting tangled up in the finish line banner. M40 Emlyn Hughes (Fareham, 1:21:54) and unattached John Maynard (1:22:35) completed the podium.

Special touches at the Marafun UK organised event include its green credentials. Race day coincided with World Car Free Day and the organisers laid on free park and ride services into the city. Radnor 250ml recyclable tetra pak cartons of spring water were used on the course and the finish line goody bags were paper, not plastic.