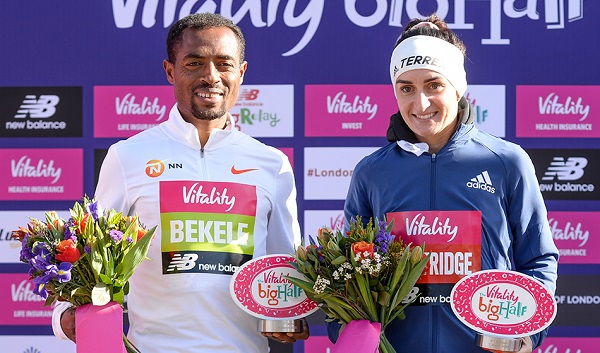 Thompson pushes Bekele hard in The Vitality Big Half

Bekele (60:22) sliced almost a minute off Sir Mo's 61:15 record from last year but it was Chris Thompson (Aldershot) – fifth last year in 63:41 – who the 37-year-old Ethiopian can thank for setting the pace in a fearless bid for victory.

Thompson was rewarded for one of his best-ever races with 61:07 (also inside Farah's record) to claim the British title and a place in the World Half Marathon Championships in Gdynia, Poland on 29 March. This was Thompson's best half marathon result since setting his PB (61:00) while finishing sixth in the 2012 Great North Run.

Jake Smith (Cardiff, 62:00 PB) broke his own British under-23 record for third and Ross Millington (Stockport, 62:33 PB) also impressed in fourth. Both should be joining the rejuvenated Thompson in Poland at the end of the month. The late withdrawal of Kenya's Lawrence Cherono may have encouraged the GB athletes to have a go and Thompson led for seven miles before Bekele made his move on Tower Bridge.

Referencing the crowd support, Bekele said: "There’s no question about the crowds in London being great. There was cheering all around the course; it felt like a great place to be thanks to the amazing people of London.”

After turning the clock back, Thompson said: “As long as my heart is still beating and I have fire in my belly, then I’ll keep showing up. I’m pleased with my run today. I think my first mile was 4:20, so that’s a PB. I wasn’t here to mess around today.”

Despite her pace on a breezy day, Partridge didn't feel like she was flying: “I feel like I’m on the up from injury and I don’t feel like I’m flying, so that’s a big confidence booster. I’m excited to get back to work for London. The crowds at The Vitality Big half are incredible. Everyone knows your name, and they shout for you, which you don’t always get when you race abroad. I will absolutely be back next year to defend my title.”

The Vitality Big Half is a huge community event with a record 16,222 finishers and we will bring you further news from this fantastic race tomorrow.