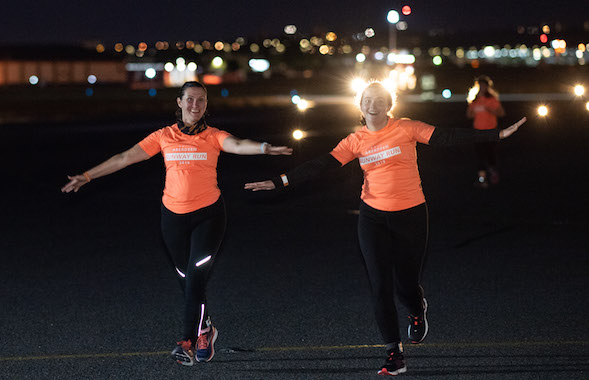 Organiser Captain Ryan Broadhurst from sponsors CHC Helicopters told runABC Scotland online: “The experience of being on the runway at midnight is amazing. It really is the best time to be out there with little traffic and all the lights. It’s an incredible feeling, just standing on the tarmac with 300 odd people standing behind you.’

“The event itself now attracts runners of all kinds: charity runners, joggers, elites and club runners. It’s a good event for everyone because no one really knows how to run the unusual 3.5km distance, not even the experienced runners.”

The route itself takes in the full length of the runway, then turns back towards the finish line. Last year’s winner, Richard Strachan, covered the distance in a record 11 minutes and 14 seconds.

Broadhurst added, “The sight of the terminal lights at the finish and the whole of the experience itself takes away from the sore legs!”

Although the UK now hosts quite a few runway runs – with Dundee’s being the most recently launched – no two are the same. Each event has its own character based first and foremost on the safety and security requirements of its host airport.

Restrictions at Aberdeen mean the event crew only have an hour and a half to set up on the tarmac – from the time of the last flight at 22.30 until the race start at 12midnight. Every runner must be also finished and moved back into the terminal for the post-race celebrations, as well as the route tidied up, within an hour.

But that’s not a problem, Broadhurst says. With two years under their belts now, organisation is pretty slick. And the slight pressure of time does enhance the competitive element of the run for those of a faster persuasion.

The midnight start also means all participants in the Aberdeen Runway Run enjoy a proper build up to the event. After their 9.30pm arrival at the terminal last year, runners were entertained by live music, cheerleaders and a pipe band as they waited for the start.

Runners can enter as individuals, or take part in the Team Marathon.

Prizes will be awarded to those on the podium as well as top fundraisers. This year's prizes have not been announced, but if last year's are anything to go by, they will be spectacular: the top fundraising team for the 2019 run was rewarded with a helicopter sightseeing tour over Aberdeenshire.