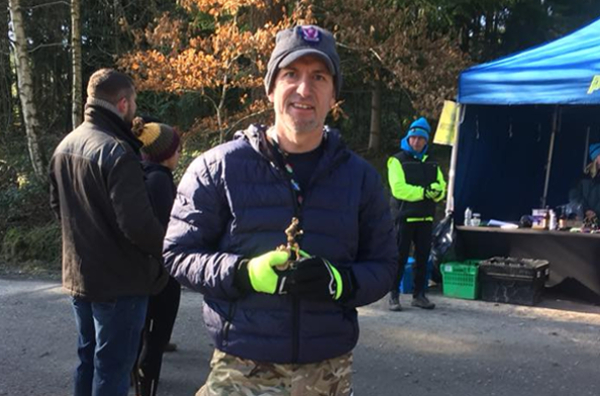 Vegan Force At Mortimer Madness Half

A military show of strength from lean and green Steve O’Connor saw him win the ‘Bergen’ category at Sunday’s (25 February) Mortimer Madness Trail Half Marathon. And he wasn’t the only vegan runner to give the hilly course a beasting.

Known as ‘Plant Powered Steve’, the 45-year-old wore military kit and boots and carried a 35lb pack as he pounded his way along challenging terrain in Mortimer Forest, Ludlow. The forest is located on the Shropshire/Herefordshire border with moderate to hard trails which include the 1230ft High Vinnalls.

The vegan champ was one of three runners competing in the Heavy/Light Bergen category, added by organisers PulsePursuits to increase the toughness level. This was also good preparation for the Fan Dance – a 15-mile load bearing march used by the UK’s Special Forces in the Brecon Beacons.

A former member of the RAF’s Elite TSW Unit, Steve has completed two of these events along with the Paras 10 Hell Runner and is always looking for new challenges.

The day was cold and dry for this DirtRun event, passing through the beautiful surroundings of Mortimer Forest and with stunning views from the top. Boots on or off, this is advertised as one of the hardest trail half marathons due to the lung-busting climbs! It is ideal for any runner looking to step up from 10Ks or training for their first marathon or ultra.