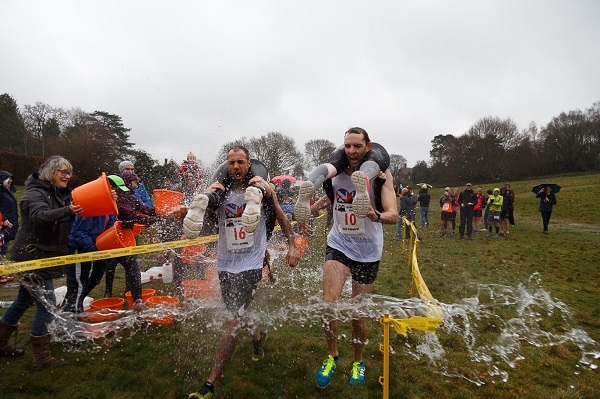 Chris & Tanisha are engaged in wife carrying action in Surrey

The first male in the 12th annual UK Wife Carrying Championships carried more than his partner at Dorking on Sunday (3 March). Last year's champion Chris Hepworth secreted a ring about his person and produced it at the finish to propose to his 'wife' Tanisha Prince and the lady said: “Yes”!

The couple, both aged 28 and from West Drayton, used the universally popular 'Estonian Hold' to retain their title and will now return to the World Wife-Carrying Championships in Finland on 5-6 July, where they were placed fifth last year, as an actual husband and wife.

The Nower at Dorking provided an already slippery and rutted surface due to the inclement weather but pairs also had to cope with straw bale obstacles and buckets of water thrown at them by rather zealous volunteers. The eventual winners are wearing number 10 in our all action photo above, courtesy Trionium Wife Carrying Championships website.

The organisers claim wife carrying was invented on 8 June 793 AD, when Viking raiders were on the rampage in Lindisfarne in the North East of England, destroying the monastery and carrying off any available wenches. As we became a little more civilised the practice fell by the wayside after a few hundred years but it was revived by the first UK Wife Carrying Championships in 2008.

Sunday's winners received a keg of beer worth £150 plus £250 towards their trip to Finland, where they will again face the fearsome competition provided by Lithuanian pair Vytautas and Neringa Kirliauskas (pictured below) who are the reigning world champions.

Among the quirky prizes at Dorking on Sunday were a tin of pilchards and a jar of Bovril (you know, from before the war) for the oldest wife carrier and a pound of sausages and the respect of fellow competitors for the carrier of the heaviest 'wife', who may be of either gender and clearly does not have to be the carrier's actual wife!

There are plenty of extraordinary photos and videos on the Trionium Wife Carrying website which is well worth a visit.