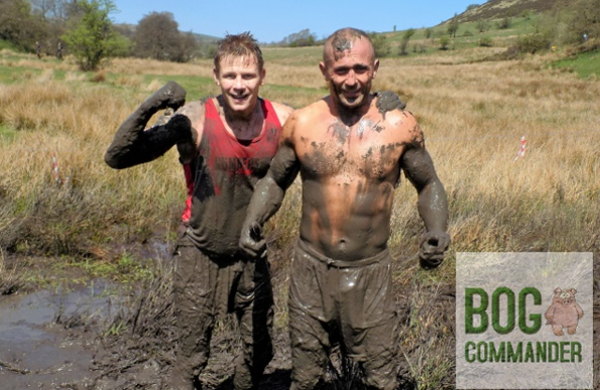 Competitors were in the thick of it last Saturday (5 May) at Bog Commander as they fought their way through mud, up hills and over obstacles. The conditions didn’t extinguish the energy or enthusiasm of two firemen who took part in this gruelling obstacle race.

Kris Illingworth and Richard Wilds of Humberside Fire and Rescue completed five laps of a very tough 6k course and still had the strength to run back to the car park afterwards! They were the only two racers to manage 30k and also posted the fastest lap times.

One lap is sufficient for most people due to the punishing terrain although the endurance runners managed three or four, an impressive achievement in itself. But our determined duo notched up five laps and together with their fellow firefighter Grant Lakin, was the winning team. Another colleague Mikey Fulton completed two laps (12k).

This event was organised by Roy and Karen Ballington who are hill farmers in the Peak District. As well as being a working farm they also host Bog Commander with water, mud, cargo nets, slides and an assortment of natural and man-made obstacles. Set in the Manifold Valley, a popular tourist attraction known for its scenic views, Thor’s Cave and Wetton Mill. And hills!

New for this year was a ‘family wave’ where junior bog commanders could take on the full 6k course and all the obstacles accompanied by a parent. There was no backing out for mum or dad who got the chance to act like big kids and experience the mud and obstacles alongside their children.


Everyone who finished fully earned the title of ‘Bog Commander’.