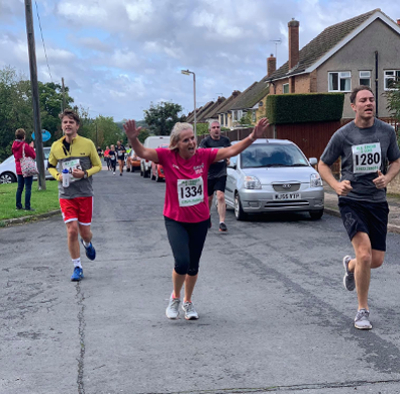 Toughing it out at Abbots Langley

Runners may have been gasping for breath after Gallows Hill Lane but they showed they could handle it at Sunday’s (6 October) Abbots Langley Tough 10 as the race lived up to its name.

The Abbots Langley Tough 10 arrived on the running scene in 1982 to raise money for the charity MENCOP. It was a 10 mile road race in the early years but switched to 10K and along with a 5K, 3K and 1K is open to everyone.

Described as a ‘challenging’ event, it fundraises for local charities and beneficiaries and during that time has provided specialist equipment for people with mobility issues, donated to hospices and baby units and helped with medical costs for individuals.

Manor House Grounds was the location for the start/finish as runners prepared to follow a hilly, rural course through the villages of Abbots Langley, Bedmond and Kings Langley before encountering the steep hill at 9K. There was a flat section for the final 1k then a dash for the finish line.

In the 10K, there were only a couple of seconds separating Mark Lovatt from Terry Mackin with Lovatt the winner in 37:26 and Mackin second in 37:28. Hamish Shaw of Gade Valley Harriers was third in 38:43.

Hannah Trotman of Watford Harriers was the winning female in 43:11 followed by Lucy Warby in 45:17. Sylvia Moss of Chiltern Harriers AC came third in 45:32.

Also taking part in the 10K (and 5K too!) were a group from UcanJog2, a women only running club based in Abbots Langley and Radlett who stood out in their bright pink tops. A friendly, supportive club whose ‘pink ladies’ motivate and support each other in training sessions and races.

They along with all the other runners showed they were tough enough.