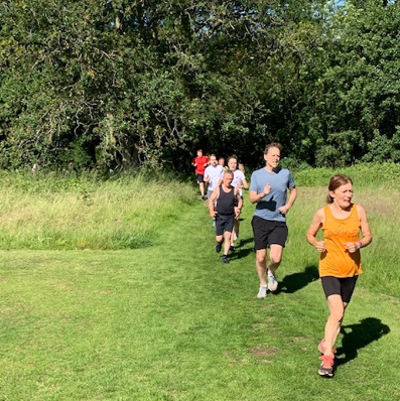 There was sunshine and a record attendance at Saturday’s (22 June) Harcourt Hill parkrun in Oxfordshire. This turnout was boosted by a sizeable number of regular parkrunners from Abingdon.

Abingdon parkrun was cancelled due to the Food & Drink Festival taking place on the Saturday and event regulars there journeyed over to Harcourt Hill and were rewarded with sunshine and an attractive, almost flat course at Oxford Brookes University.

Summer made a welcome appearance as 213 people including 54 first timers mingled outside the University Sports Centre (Brookes Sport Botley) on the Harcourt Hill Campus.

Run director Claire Hazleton conducted the briefing before sending everyone on their way at 9am on a two lap course entirely on grass. Heading in a clockwise direction they followed the boundary around seven sports pitches, tennis courts and a 9-hole golf course, guided by wooden distance marker posts. They repeated this for a second time past the grounds keeper’s shed then through the finish funnel at the Sports Centre.

Will Frank was the first man across the line in 17:43 – only two seconds separating him from Dhrupadh Yerrakalva of Manchester University Students who finished in 17:45.

Kate Allred of Eynsham RR was the first female in 20:48.

Despite the big numbers the event was ably managed by 14 well-prepared volunteers with Claire Hazleton reporting post-race: "It was a particularly noteworthy event as together we all set a new attendance record of 213 - we finally got to break out our extra finish tokens that we’d prepared after previously having got close to breaking the 200 limit of our usual token set."