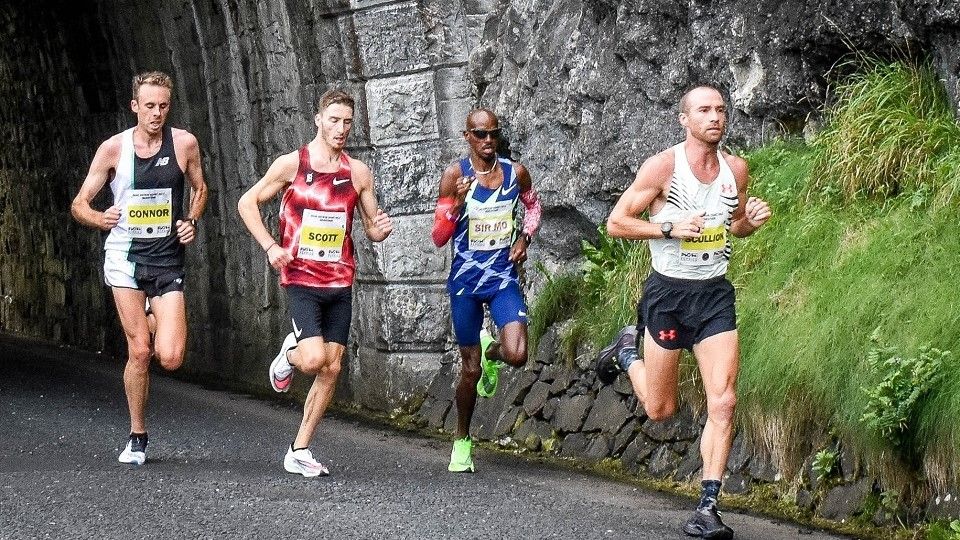 Sir Mo Farah bounced back from his world record one-hour track run in Brussels on 4 September to win the P&O Ferries Antrim Coast Half Marathon in Larne on Saturday (12 September).

With just eight days between the events, the slightly more leisurely pace was appreciated by the 10-time global track gold medallist. In Brussels, he ran 21,330m in 60 minutes to improve Haile Gebrselassie’s 2007 world record. In Larne, the task was to run the classic road half marathon (21,097m) in around an hour to defeat a classy entry, that included seven Olympic finalists.

In our preview we had predicted Sir Mo may have to run close to his UK record (59:32) to defeat rising star Marc Scott (Cambridge & Coleridge) on his half-marathon debut. So it proved as Farah – sporting bib number one – Scott, Ben Connor (Derby) and Northern Ireland favourite Stephen Scullion (Adershot) zipped through 10K together at 30:34.

The results were littered with personal and seasonal bests and none were more significant than Tommy Hughes (Leicester, 1:11:09), who took more than six minutes off the M60 masters' world record held by Austria's Heinz Steiner (1:17:28) since 2006. Hughes ran the 1992 Barcelona Olympic Marathon for Ireland, finishing 72nd in 2:32:55 and last year ran Frankfurt Marathon in 2:27:52 aged 59. When his son, Eoin Hughes, finished the same race in 2:31:30, their combined time (4:59:22) was the fastest ever by a father-son duo in a marathon!

Starting at the Chaine Memorial Tower, built in 1888, the course sweeps through Larne town centre before moving onto the iconic Antrim Coast Road. The coast's stunning landscape was recognised by the makers of Game of Thrones, who used the area extensively as one of their filming locations. Turning homeward at Ballygally Castle, the course offers one of the fastest finishes to any road race.