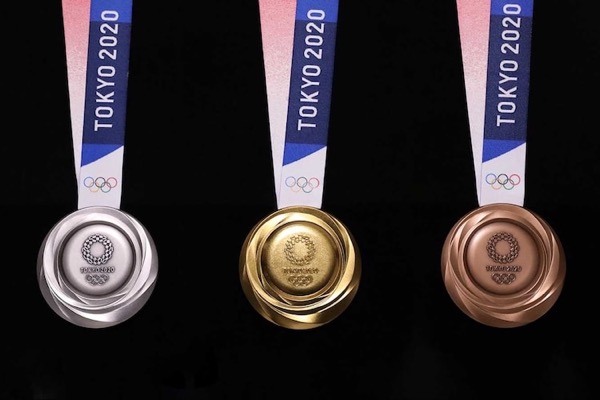 The Tokyo 2020 Olympic and Paralympic medals presented to athletes will be the culmination of an historic project, with all 5,000 being completely made out of recycled electronic devices. The unique medals are the outcome of Everyone’s Medal Campaign, launched in April 2017, to collect and recycle electronics from the public.

It is estimated that close to 80,000 tonnes of discarded devices were collected, a haul which included approximately 6.21 million used mobile phones, digital cameras, handheld games and laptops. This resulted in final totals of 30.3kg of gold, 4,100kg of silver and 2,700kg of bronze collected by the end of March this year.

The intricate designs, which will adorn all 5,000 medals, reflect patterns of light in order to symbolise the energy of the athletes. The designs also represent how athletes strive for victory on a daily basis, as well as the Olympic themes of diversity and friendship.

A statement from the organising committee said of the design: “The medals collect and reflect myriad patterns of light, symbolising the energy of the athletes and those who support them.

“Their design is intended to symboliise diversity and represent a world where people who compete in sports and work hard are honoured. The brilliance of the medals’ reflections signifies the warm glow of friendship depicted by people all over the world holding hands.”

The inspiration for Everyone’s Medal Campaign is said to have come from the 2010 Winter Olympics in Vancouver, which saw metal company Teck Resources and Canadian Mint team up to produce around 1,000 medals.