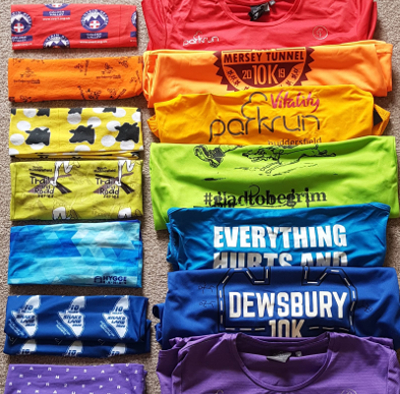 This week runners are wearing a different coloured top each day that represents the colours of the rainbow as a tribute to key workers. Seven days + seven colours = the running community coming together as one in this crisis.

The rainbow has become a symbol of hope during the coronavirus crisis and its colours brighten up what are dark days for all of us. Children have taken to putting up rainbow pictures in their windows to lift spirits during the lockdown and remind us that we are all in it together.

Event organisers See York Run York in conjunction with Its Grim Up North Running have launched a week-long event to say ‘thank you’ to the NHS and other frontline workers for keeping us safe and the country going. The aim is to turn social media into a gallery of rainbows whilst showing support for their endeavours.

This virtual event is open to everyone irrespective of age or ability and can be done while self-isolating as well as outside. Walking is equally acceptable as is exercising at home and participants choose their distance and time. There is no requirement to run every day.

On Sunday they will post a rainbow collage of their week’s photos to share with the community, acting as a colourful finale to this warm-hearted initiative.